KEYS TO THE MATCH: THE LAST THREE MATCHES 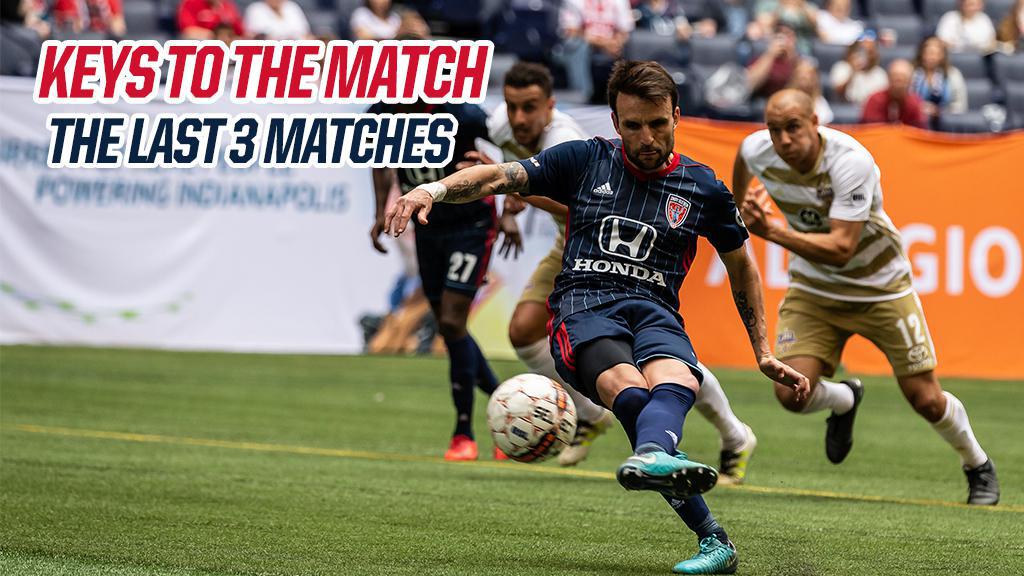 After every game in 2018, IndyEleven.com’s Drew Kamaski will give his three takeaways from the performance of the “Boys in Blue.” This week's edition comes after "Indiana's Team" finished a three-game stint in eight days

AYOZE FROM THE SPOT

Finishing from 12 yards out is never as easy as it seems. Finding a player who can consistently finish from the penalty spot can be even more difficult for a coach. Luckily for Indy Eleven head coach Martin Rennie, he possesses a world-class Spaniard, Ayoze, who finishes from the spot with power and placement.

The Indy Eleven defender converted from the spot twice in Week Eight. The first penalty he took found the back of the net last Wednesday against FC Cincinnati. The spot kick gave the Eleven a 2-1 lead at the half hour mark. The second penalty in as many games came against Louisville City FC last Saturday. The strike into the top left corner of the net handed Louisville their first loss of the season in their first ever USL matchup against the “Boys in Blue”.

Indy Eleven played three games in the span of eight days. The first fixture away at Charlotte Independence on April 28 saw Indy register its first scoreless draw of 2018. The next game came at home against FC Cincinnati on May 2. The “Boys in Blue” fell, 2-3, against the Ohio based team for the second time this season. The last fixture was against Louisville City FC on May 5 in the first ever USL matchup between the two teams. “Indiana’s team” handed Louisville their first loss of the season, 1-0, ending their six-game undefeated streak.

Three games in such a short span has the potential to tire any back line, but despite the heavy work load, the “Boys in Blue” were able to keep two clean sheets, which moves Owain Fon Williams and Indy Eleven into a tie for second in the Eastern Conference. The “Boys in Blue” have given up the least amount of goals in the East, conceding only five in seven games.

Indy Eleven have accumulated 13 points out of a possible 21 so far in their inaugural USL campaign. The “Boys in Blue” sit at sixth in the Eastern Conference, four points off league leaders FC Cincinnati. May will continue to be a busy month for the team, with two league games down and four to go, as well as the inclusion of Indy’s second round entry to the Lamar Hunt U.S. Open Cup.

The five teams that sit ahead of Indy Eleven are all within four points. The “Boys in Blue” play three of the five teams they chase before the end of May.  This Friday, the team travels to play the Pittsburgh Riverhounds who are two points clear of Indy in third place.  At the end of the month the Charleston Battery come to town and “Indiana’s Team” visits the “Big Apple” to take on New York Red Bulls II, who are both currently one point ahead in fourth and fifth place respectively. The potential for the East Conference table to shift in the month of May is high with all teams in close proximity of each other.

Indy original Brad Ring also made his 100th appearance for the “Boys in Blue” against Louisville City FC last Saturday. Ring is two appearances away from claiming the record for most appearances all time with Indy Eleven, held by former Eleven midfielder Don Smart with 101.