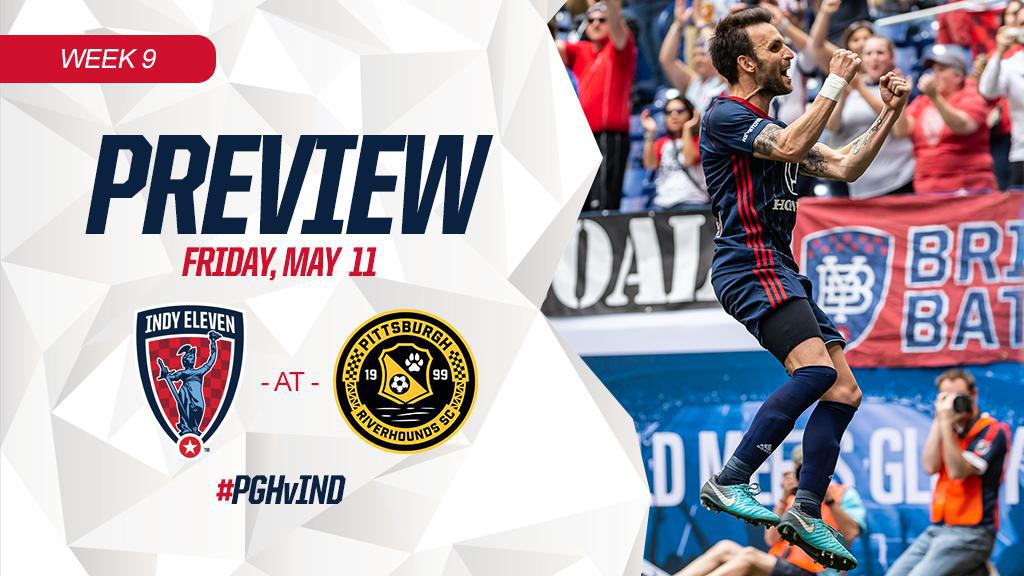 Indy Eleven continue an action packed month of May this Friday as the “Boys in Blue” seek out three more points on the road against the last undefeated team in the East, Pittsburgh Riverhounds SC.

The “Boys in Blue” sit at sixth in the table after playing three games in a seven day span, earning 4 out of a possible 9 points. The most recent match for the Eleven was a victory against former Eastern Conference table leaders Louisville City FC. The 1-0 victory against the “Boys in Purple” came from a penalty converted in the 78th minute by Indy Eleven defender Ayoze.  The win was crucial for “Indiana’s Team” after a scoreless draw against Charlotte Independence in Week Seven and falling to FC Cincinnati, 2-3, at home in the first fixture of Week Eight. Pittsburgh Riverhounds enter Week Nine sitting at third in the Eastern Conference table with 15 points. The Riverhounds are the last undefeated team in the East after Louisville’s loss to Indy in Week Eight. Pittsburgh defeated Toronto FC II in their Week Eight game, 2-1, with goals from forward Neco Brett and Captain Kevin Kerr. Brett was named Man of the Match after he scored the first goal and assisted the second.

Indy Eleven’s form on the road remains an integral part of their success this season. “Indiana’s Team” has accrued 7 out of 9 points on the road in their inaugural USL campaign. The “Boys in Blue’s” stiff defense has been the key to their road success, keeping three clean sheets in three road games.

Nico Matern has been a consistent presence in Indy Eleven’s midfield through the opening weeks of the season. He has appeared in six of seven games for the “Boys in Blue” in 2018, all of which have been in the starting XI. . The FC St. Pauli youth product has completed nearly four-fifths of the almost 270 passes played. The “New in Blue” midfielder also has the ability to read passes before they are played with 15 interceptions in the midfield.

The Buxtehude, Germany native spent last season with Indiana Wesleyan University, where he earned NCCAA All-Team honors. Before moving to the States to play soccer, Matern spent most of his youth career with several German fourth and fifth division sides.

"A guy like Nico (Matern) does an amazing job,” said Indy Eleven head coach Martin Rennie. “As a coach, you really, really, really appreciate that. He's filling gaps; he's taking the ball under pressure all the time, playing it out of pressure. He's got a strong body, strong physical presence. He organizes and keeps people close to him."

Midfielder Kevin Kerr has found himself in the starting eleven for Pittsburgh quite often, starting six of seven games he’s played in so far in 2018. Kerr has had a stellar year with the Riverhounds accumulating two assists and holding 86 percent passing accuracy inside his half.

Last time out, the midfielder completed just over 90 percent of the passes he played, along with an impressive 83 percent in the attacking half against Toronto FC II. On top of moving the ball with ease, Kerr assisted teammate Neco Brett in finding the back of the net in the 12th minute. Brett returned the favor 24 minutes later, setting up Kerr for a strike that would find the bottom left corner of the net.

This is Kerr’s sixth year with the Riverhounds. He is fourth in games played for the Pennsylvania team and first in minutes played.

Indy Eleven defender Carlyle Mitchell will be tasked with slowing down Riverhounds forward Nico Brett in Saturday’s matchup at Pittsburgh. Mitchell has been an integral piece of the backline for the “Boys in Blue”, earning him a starting position every game so far in 2018. The Trinidad & Tobago International has boasts a nearly 90 percent tackle rate, missing only one so far this season. Additionally, Mitchell has won two-thirds of his aerial duels thus far, keeping opposition forwards from getting on the ends of crosses.

Mitchell returns to a Coach Rennie’s squad after previously lining up under the Scotsman during stints with Major League Soccer’s Vancouver Whitecaps and Korean second division side Seoul E-Land. He’s also made 35 appearances for Trinidad & Tobago, scoring three goals.

Brett will be attempting to break through Indy Eleven’s backline on Saturday, as he did last week where he scored and assisted in the game against Toronto FC II. Brett has found the back of the net an impressive five times in seven games, making him the leading goal scorer in the Eastern Conference. Furthermore, the Jamaican has also collected two assists, tying him for the most assists on his team so far this year.

Mitchell will have to deny passing lanes into the box to slow down Brett, who has scored all of his goals from inside the 18-yard box. On top of being a presence in the box, Brett possesses the ability to hold up play and create chances for his teammates making oncoming runs.

All the action takes place on the road this Friday, May 11, at 7:00 p.m. Fans can watch the match LIVE on ESPN+! New users can sign up for a free 7-day trial at plus.espn.com.