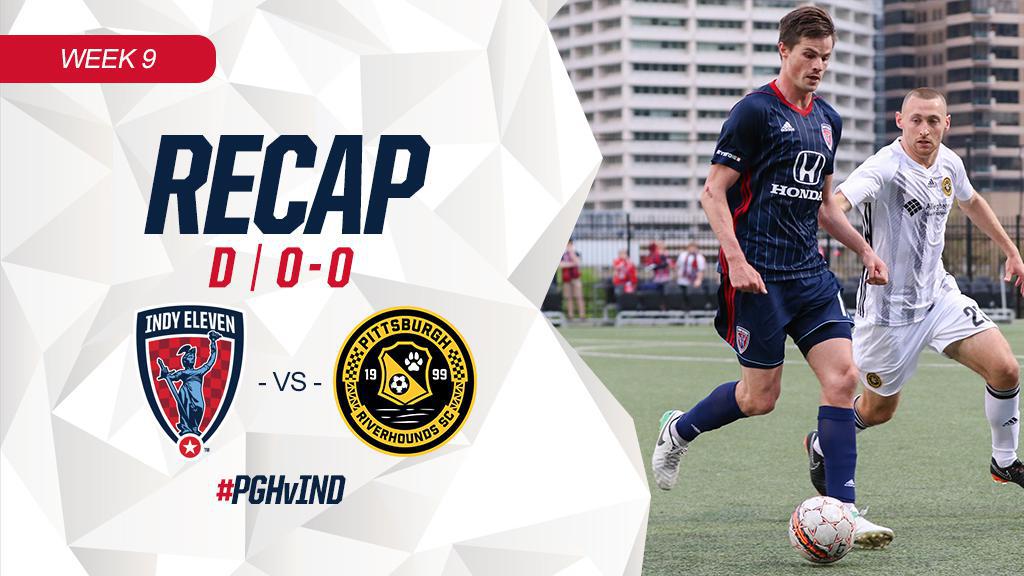 Indy Eleven share points in a 0-0 draw on the road against the undefeated Eastern Conference side Pittsburgh Riverhounds SC. The “Boys in Blue” remain undefeated on the road in 2018 with an overall 4W-2L-2D record.

The two teams ran back and forth in the midfield for much of the first half as they searched for goal scoring chances. Both sides found their first looks at goals minutes apart just before the half-hour mark. The Riverhounds saw their first opportunity in the 23rd minute as defender Jordan Dover crossed inside the box to forward Neco Brett, but the attempt was forced out by Indy's backline. The Hounds returned two minutes later with a shot from Dover inside “Indiana's Team's” 18-yard box that was blocked by Eleven defender Ayoze, which resulted in a corner kick for the home side. After another 60 seconds, Brett returned for Pittsburgh's third attempt from distance that ended with the ball several feet wide of Indy's post for a goal kick.

Indy was quick to answer. In the 29th minute, Indy Eleven forward Soony Saad tallied his first attempt after he received a long pass from midfielder Nathan Lewis near the top of Pittsburgh's box. Saad slammed the ball towards goal, but the hit sent the ball just over the crossbar. A minute later, Saad got his second shot off at the top of the box that slid a tad to the left of the post and out of play. Indy's third chance came in the 32nd minute when forward Jack McInerney nearly tapped the ball in from close range from a corner kick by Saad. Much like Saad's previous attempt, McInerney's hit also landed just to the left of goal off his ankle.

The Riverhounds would make a final run at goal in the last minute of the first half. Pittsburgh midfielder Christiano Francois shot the ball inches outside the 6-yard box near the edge of the field when Indy goalkeeper Owain Fon Williams registered a quick block to hit the ball from play.

The first half came and went as both sides remained level heading into the second half. The remainder of the match mirrored the first half with each side only finding one near attempt at goal.

In the 59th minute, Francois came close again for Pittsburgh, this time directly in front of goal. PGH midfielder Kenardo Forbes lobbed a low cross from the right edge of the field to the center of 6-yard box, where Francois had ran in. Right before the Haitian could hammer the ball in, a diving clearance from Indy's first-half substitute defender Brad Rusin slammed the ball over the crossbar.

Saad came close to netting for his side seven minutes later after winning a free kick nearly 40 yards out from goal. Similar to free kicks the forward has hit as distance in previous matches, Saad's ball went curling towards goal. Unfortunately, the attempt barely over the frame. Both sides carried on with the match, but neither team could find the winning goal.

Indy Eleven take to the road once more next Wednesday, May 16, to face off against USL PDL side Mississippi Brilla FC in the second round of the Lamar Hunt U.S. Open Cup. Then, “Indiana's Team: will return home to Lucas Oil Stadium next Saturday, May 19, at 8:00 p.m. to take on Bethlehem Steel FC. Fans can get tickets for as low at $15 at www.IndyElevenTickets.com or by calling (317)685-1100.