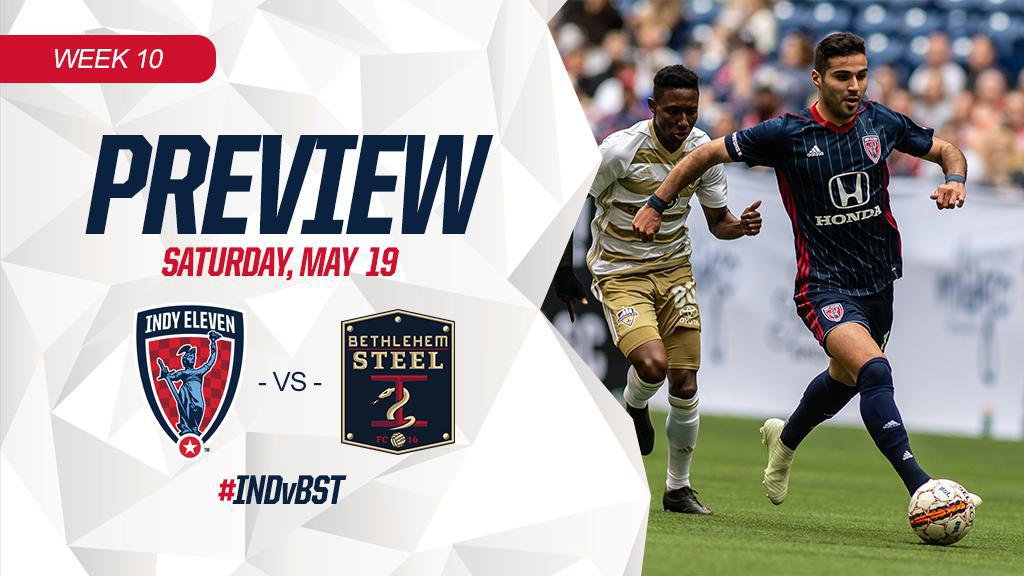 Indy Eleven will welcome Bethlehem Steel FC to Lucas Oil Stadium for the first time on Saturday, May 19. The “Boys in Blue” aim to snag their third home victory of the season and three points against the Pennsylvania based team, and their second consecutive win at home.

“Indiana’s Team” currently sits at fifth place in the Eastern Conference, with a 4W-2D-2L record, after drawing with Pittsburgh Riverhounds SC, 0-0, last Friday, May 11. Despite having seven attempts at goal, Indy Eleven was unable to unable to break the stalemate. The team’s stout defense on the road continued, as Indy Eleven goalkeeper Owain Fon Williams recorded another clean sheet. The Welshman is now tied for the most clean sheets in the USL with 5 in 8 games.

Bethlehem Steel FC head to Indianapolis for the first time after winning, 3-0, at home against New York Red Bulls II. The Steel surged into 9th in the Eastern Conference with a 3W-2D-4L record. Bethlehem midfielder Michee Ngalina opened his professional account, scoring the Steel’s first goal of the match in the 37th minute. Midfielder Fabian Herbers doubled Bethlehem’s lead in the 63rd minute with a shot from the top of NYRB II’s box.  Bethlehem finished the match in style as midfielder Adam Najem slotted another ball between the posts in the 94th minute of play.

Both teams will be coming off mid-week fixtures. Indy Eleven enter Week 10 after bowing out of the 2018 Lamar Hunt U.S. Open Cup against USL PDL’s Mississippi Brilla FC, 1-0, on Wednesday.

Indy Eleven goalkeeper Owain Fon Williams has been a rock between the posts for the “Boys in Blue” through the first eight games of the season. The Welsh goalkeeper has accumulated five clean sheets, a tally that has him tied for first in both USL conferences. The Wales International sits just under a 75 percent save rate for the season, saving 13 out of18 shots faced.

Fon Williams has played a key role for “Indiana’s Team” between the sticks. Fon Williams and the Eleven defense has only conceded five goals this season, averaging one goal allowed for every two games played. With a high volume of games in the month of May and the squad rotating frequently, Fon Williams’ name will be the one to remain a constant on Indy Eleven head coach Martin Rennie’s team sheet.

Bethlehem Steel FC midfielder Adam Najem has been a staple in the team’s midfield. The 23-year old has started 7 out of 9 games for the Steel this season. The midfielder has helped to control the tempo through the middle of the park, averaging just over 80 percent passing accuracy in 2018. His ability to create chances for his teammates makes the midfield maestro dangerous. He’s tallied 12 key passes and created one goal for his teammates at Bethlehem Steel FC.

Najem aims to continue his stellar performance after thrashing New York Red Bulls II at home. Last time out, Najem added his name to Steel’s stat sheet for the first time in 2018 and his third overall since joining the Steel last season. Additionally, the Clifton, New Jersey tallied four interceptions and created five chances, making him dangerous on the counter attack. The attack minded midfielder will attempt to deliver key passes between Indy Eleven’s backline to spring forwards into one-on-one scenarios.

Indy Eleven’s success in the front third against Bethlehem Steel FC will rely on the creativity of forward Soony Saad. The former University of Michigan forward has created the most chances, 12, out of his teammates in the 2018 campaign. The Lebanese International has also attributed two goals out of Indy’s seven this season. Both goals came from a two goal performance against Nashville SC.

Saad’s ability to perform in dead ball situations makes the forward even more dangerous should Bethlehem commit fouls inside their own half. The second goal of Saad’s brace against Nashville was a free kick strike that earned him a spot in the SportsCenter Top Ten and named USL’s Player of the Week in Week 5. He nearly netted another dead ball goal in the fixture against Pittsburgh Riverhounds SC, but narrowly missed high right.

Bethlehem Steel FC defender Matt Mahoney will be one of the men tasked with slowing down Saad. Mahoney has started and played every minute for Steel FC so far in 2018. He boasts a tackle success rate of 85 percent, having only missed three tackles during the eight games he’s started. On top of being a brick wall, the 23-year old’s ability to read the field and shut down passing lanes has led to his 25 interceptions on the season.

Mahoney leads Bethlehem in both tackles won and interceptions. He directs a backline that allows just over one goal a game. The Buffalo, New York native will have to keep an eye on the creative Saad, who will attempt to keep Bethlehem from obtaining their first clean sheet of the season in Lucas Oil Stadium on Saturday.