KEYS TO THE MATCH: #INDvBST

After every game in 2018, IndyEleven.com’s Drew Kamaski will give his three takeaways from the performance of the “Boys in Blue.” This week's edition comes after "Indiana's Team" fell to Bethlehem Steel FC at home, 1-2.

Indy Eleven honored midfielder Brad Ring just before kickoff last Saturday against Bethlehem Steel FC. The Indiana University alum, coined “Legend” by fans, received a framed jersey that donned his last name and the number 100, which recognized his hundredth appearance with the team. His achievement came in Week Nine in a 0-0 draw on the road against Pittsburgh Riverhounds SC.

The Brickyard Battalion celebrated Ring’s achievement before and after the match against Bethlehem. During the presentation ceremony, the BYB flashed a tifo that featured Ring’s appearances. Post-game, the supporters group presented Ring with over 100 books to benefit Ring’s Reading Program.

Indy Eleven midfielder Zach Steinberger scored his first goal as a member of “Indiana’s Team” this season. Steinberger’s goal came in the 70th minute after Indy Eleven forward Soony Saad squared a pass into the box from teammate Jack McInerney. Saad’s ball found Steinberger in the middle, who struck a shot off the half-volley. A friendly bounce lofted the strike over Bethlehem keeper Jake McGuire for the equalizer.

The 2018 season marks Steinberger’s second stint with “Indiana’s Team” after spending the first on loan from Houston Dynamo in 2015. During the 2015 season, Steinberger made 12 appearances with the “Boys in Blue” and found the back of the net twice. The attack-minded midfielder has nearly equaled his 12 appearances in 2015, having appeared in all nine games of the 2018 season. The California native has averaged an excellent passer rating, completing four-fifths of the passes he’s played, and found the back of the net one time.

Indianapolis’ favorite month hasn’t been kind to Indy Eleven. A string of seven games, six USL fixtures and one 2018 Lamar Hunt U.S. Open Cup matchup, as well as the absence of key pieces to head coach Martin Rennie’s starting eleven, has resulted in a bit of a rough patch for “Indiana’s Team”.

“We’ve had quite a rough run on our schedule and a lot of key players unavailable,” Rennie said. “Clearly we’ve done well for the most part on the road, but overall we’ve had some good games at home but too many below the standard we expect, and our fans expect.”

Despite the difficult month of May, Rennie and his squad aren’t making excuses. The “Boys in Blue” are training harder than ever before and letting fans know the best is yet to come.

“They [Fans] can be sure that all of our players and staff will be working to get better and get on a run where we start winning consistently and become much more consistent, with not only our result, but the process of what we’re doing with our passing and finishing and our movement,” Rennie said.

Several Indy Eleven players and coaches have taken to Twitter to address fans, expressing their desire to improve. 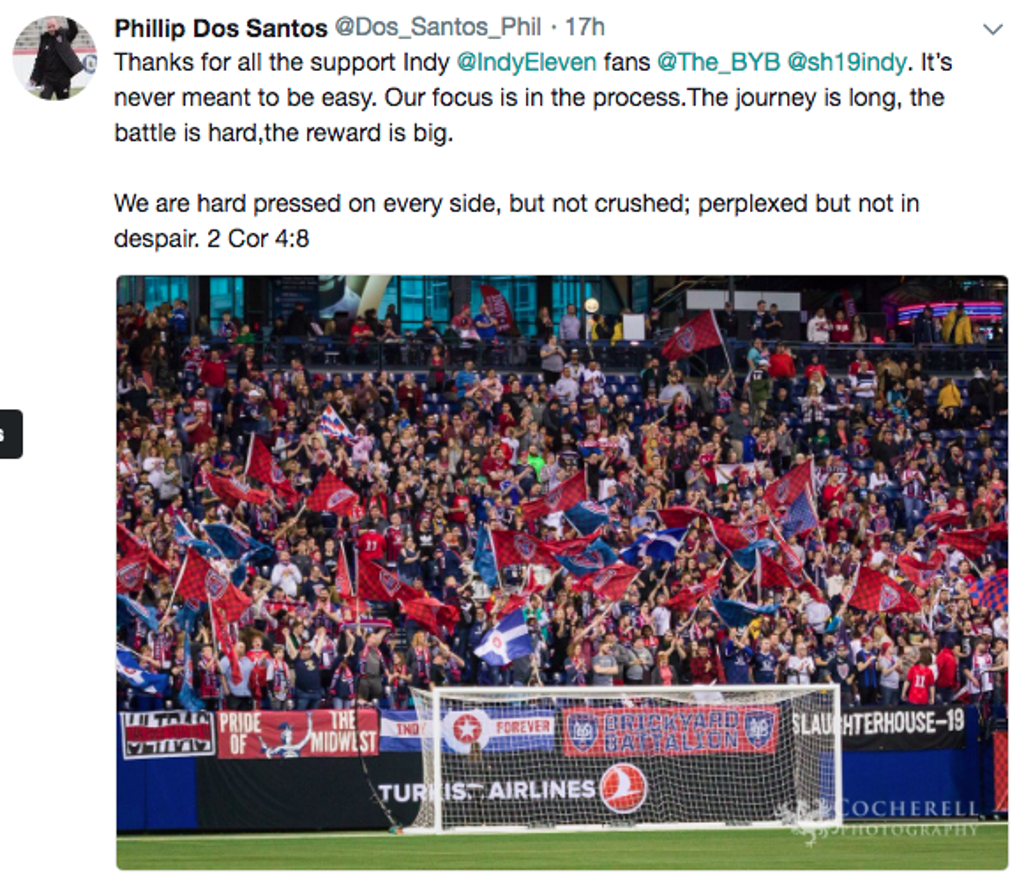 The “Boys in Blue” will work to defend their undefeated streak on the road against New York Red Bulls II this Sunday, May 27 at 1:00 p.m. Days later, “Indiana’s Team” return home to take on Charleston Battery on Wednesday, May 30 at 7:00 p.m. Fans can get their tickets to the mid-week match-up starting at just $15 by visiting IndyElevenTickets.com or by calling (317)685-1100.