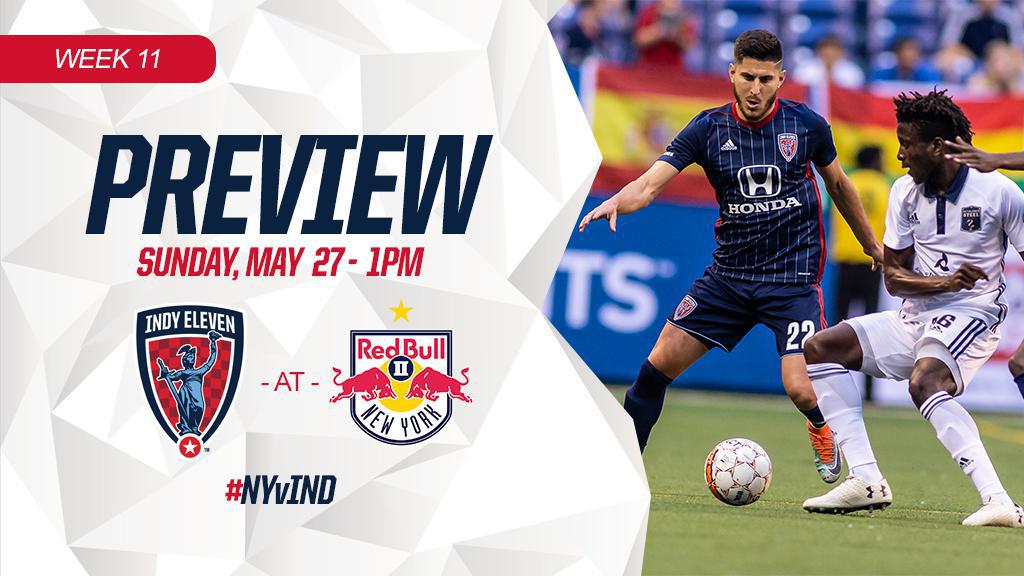 Week 11: Taking a bite out of the Big Apple

Indy Eleven aim to snatch three points away from New York Red Bulls II in a Week 11 matchup in Red Bull Arena on Sunday afternoon. Both teams are in search of a victory after coming off Week 10 defeats to Bethlehem Steel FC.

Indy Eleven are currently seventh in Eastern Conference, with a 4W-3L-2D record. In their most recent fixture, the “Boys in Blue” faced Bethlehem Steel FC at home after coming off a mid-week Lamar Hunt U.S. Open Cup loss to USL PDL side Mississippi Brilla FC. Bethlehem Steel left Lucas Oil Stadium with three points after defeating Indy, 1-2, last Saturday Indy Eleven midfielder Zach Steinberger tallied his first goal of the season in the 70th minute. The former Butler Bulldog volleyed home forward Soony Saad’s square pass played to the center of the box, leveling the game at one, but the lead would be short-lived. Four minutes later, Bethlehem scored the goal that would secure three points for the visitors.

New York Red Bulls II also enters Week 11 after falling to Bethlehem Steel FC, 3-0, in the Steel’s first of two Week 10 fixtures. They sit one spot below Indy Eleven in eighth with a 3W-2L-5D record. The Red Bulls II were shut out for the third time in ten games in 2018. They are currently tied for second in goals scored in the East with 16, but have only scored two goals in the last five games. The New York based team is also second in the USL in attempted shots, with 158, trailing only Western Conference’s Phoenix Rising FC. Red Bulls II are undefeated at home this season with a 3W-0L-1D record in Red Bull Arena.

Indy Eleven defense’s, which currently average less than one conceded goal per game, will need to be on their toes against an attack minded Red Bulls II team. Indy Eleven will need Karl Ouimette to continue shutting down opposition forwards and Owain Fon Williams to come up with more big saves.

Indy Eleven midfielder Zach Steinberger scored his first goal of the season on Saturday night against Bethlehem Steel FC. Steinberger’s goal came in the 70th minute after Indy Eleven forward Soony Saad squared a pass into the box from teammate Jack McInerney. Saad’s ball found Steinberger in the middle, who struck a shot off the half-volley. A friendly bounce lofted the strike over Bethlehem keeper Jake McGuire and leveled the scores at one.

This season marks Steinberger’s second stint with “Indiana’s Team” after spending his first on loan from Houston Dynamo in 2015. During the 2015 season, Steinberger made 12 appearances with the “Boys in Blue” and found the back of the net twice. The attack minded midfielder has nearly equaled his 12 appearances in 2015, having appeared in all nine games of the 2018 season. The Long Beach, California native has averaged an excellent passing rating, completing four-fifths of the passes he’s played, and found the back of the net one time.

New York Red Bulls II midfielder Andrew Tinari is tied for second most goals on the team (3) heading into Week 11 against Indy Eleven. The American born midfielder has started all but one game for Red Bulls II. NYRB rely heavily on Tinari’s ability to navigate the ball through the midfield, as he’s played the most passes of anyone on the team with 475. Of those passes, he’s completed just over three-quarters.

Tinari had a quiet game against Bethlehem Steel FC in their previous fixture, but expect the 22-year old midfielder to be more active in the match against Indy Eleven. The New York native is a threat in the box, where he’s scored his three goals and has also notched one assist in 2018.

McInerney is currently tied with Indy Eleven outside back Ayoze and forward Soony Saad for goals scored. The former L.A. Galaxy forward has scored both of his goals from inside the box, where he has been most efficient. The target striker aims to find the back of the net against a Red Bulls II side that has given up five goals in the last five games, three of which came last week against Bethlehem Steel FC.

On top of finding the back of the net, McInerney has also been keen on creating chances for his teammates. McInerney has created 12 opportunities on net for his fellow “Boys in Blue”, tallying one assist. Indy Eleven supporters are eager to see the form that led McInerney to second on the list of most goals scored by the age of 23 in MLS, with Indy Eleven.

One Red Bull II defender tasked with containing McInerney will be Jordan Scarlett. If one was searching for a complete defender, the 22-year old Jamaican may be as close as they could get

Scarlett has started eight games for Red Bulls II. He’s performed extremely well defensively, having completed all but two of his tackles in the defensive end. He’s also obliterated opposition passing lanes, while moving the ball extremely well himself. The young defender has completed 80 percent of his just over 300 passes.

All the action takes place on the road this Sunday, May 27 at 1:00 p.m. Fans can watch the match LIVE on ESPN+! New users can sign up for a free 7-day trial at plus.espn.com.