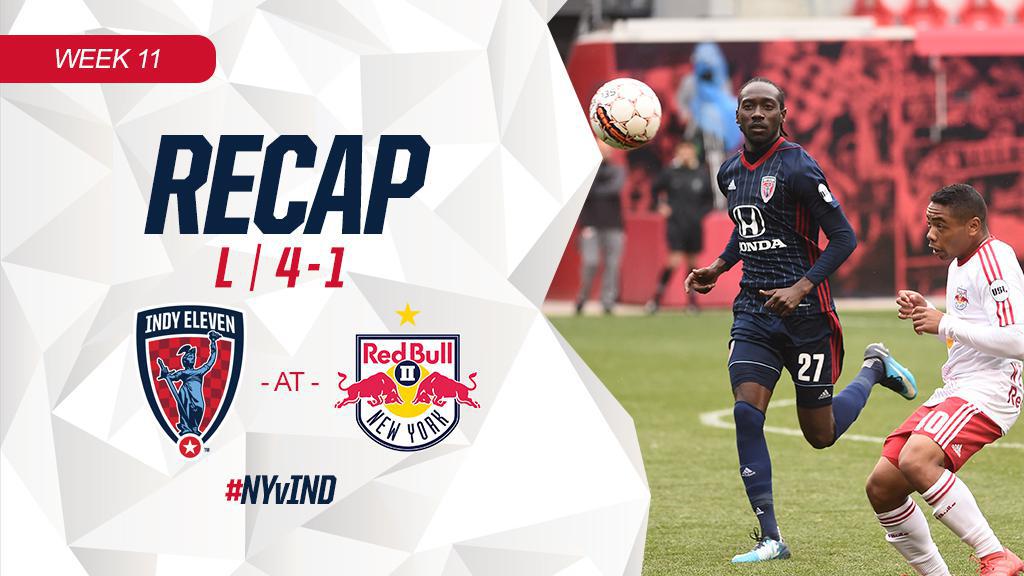 Both sides saw chances in the first half with New York having found opportunities early. Red Bulls midfielder Andrew Tinari made his first attempt at goal off his right foot in the 3rd minute from outside Indy's 18-yard box. The speedy strike lifted to chest height and directly into the hands of “Boys in Blue” goalkeeper Owain Fon Williams. New York's next best chance came 36 minutes later when forward Brian White forced a pass through the top of Indy's box to Tinari. The ball connected with Tinari, who immediate cut right to fire a shot on goal, but deflected off Fon Williams, once more.

“Indiana's Team” came up strong with two solid chances in the first half, with one chance converted into an early lead for the “Boys in Blue”. Indy defender Ayoze sent the ball airborne from near the center circle to the top of Red Bulls' box in the 21st minute. Forward Soony Saad extended his leg outward to catch, but midfielder Nathan Lewis settled the pass feet outside of the 18-yard box. Saad took a slight touch forward to lay a right-footed strike into the upper-right corner of the net.

Saad attempted a similar play 12 minutes later. The Lebanese forward played a pass through from center field to forward Jack McInerney. The former LA Galaxy forward charged into the box and fired a shot at angle, but a deflection off NYRB goalkeeper Evan Louro's foot sent the strike wide.

Indy's luck would drastically change in the second half.

A poor turnover off Eleven defender Kevin Venegas' head put the ball at White's feet inside Indy's box in the 57th minute. Fon Williams charged out to collect, but White fought through the Welshman's attempted save, and registered the the equalizer. Three minutes later, Red Bulls were awarded a penalty kick after Indy defender Brad Rusin saw a yellow card for a handball in front of his team's goal. NYRB midfielder Carlos Rivas calmly stepped up and netted New York's second goal from the spot with a shot near the lower-left post.

Indy's luck took a turn for the worst in the 73rd minute. Eleven midfielder Nico Matern was sent off the field after he'd picked up two yellow cards in a two minute time span. A total of five yellow cards and one red card were given out in a 10 minute frame starting in the 65th minute with McInerney, Martern in the 71st and the 73rd, NYRB II defender Connor Lade in the 73rd and midfielder Amando Moreno in the 75th.

Indy kept it to a one-goal game until the 83rd minute. A grounded cross from NYRB midfielder Jared Stroud deep in Indy's 18-yard box connected with Moreno for a left-footed finish just over the 6-yard line.

The Manhattan side found the back of the net one more time in the dying minutes of second-half stoppage time. Substitute NYRB forward Tom Barlow slammed the crossbar at distance in the 93rd minute. The ball deflected back out to midfielder Christian Casseres, Jr., who passed back to Barlow in the center of Indy's box for a running strike to the bottom-left post for his team's fourth and final goal of the afternoon.

It's been a tough run for Indy Eleven as of late in terms of result and injury woes, but head coach Martin Rennie continues to focus on the road ahead.

“We can take something out of today,” Rennie said. “Once we you’re down to 10 men and away from home, it’s hard to come back from that. We can’t lose too much confidence from that, though. We need to keep our heads up and focus on recovery. You can learn and improve moving forward if you have the right perspective.”

The “Boys in Blue” will return home Wednesday, May 30th, at 7:00 p.m. against Charleston Battery. Fans can get tickets to the next home match starting at just $15 by visiting IndyElevenTickets.com or by calling (317)685-1100.