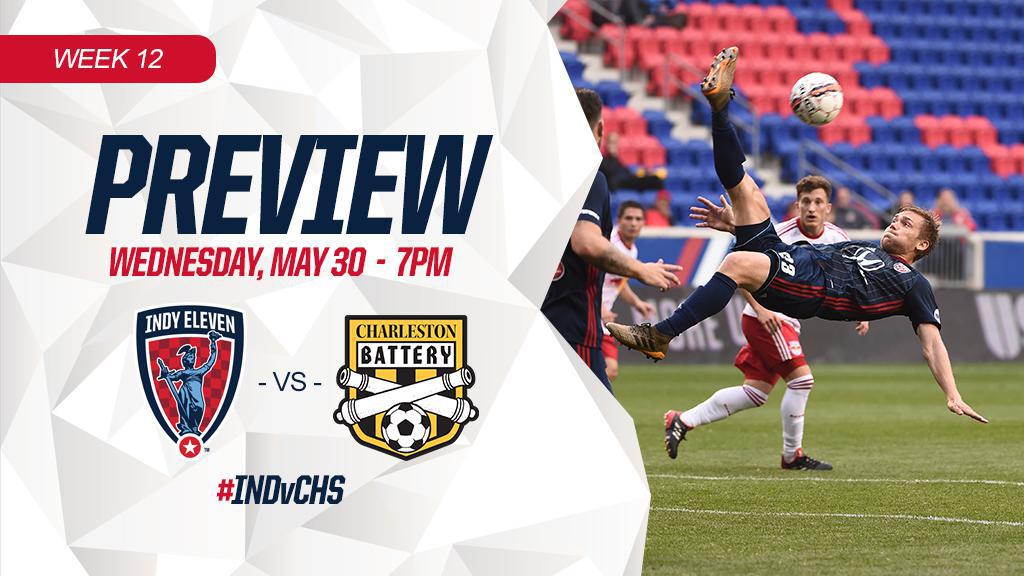 Indy Eleven seek three points at home against Charleston Battery on Wednesday, May 30 at 7:00 p.m. The “Boys in Blue” look to bounce back after suffering their first loss on the road against New York Red Bulls II.

“Indiana’s Team” currently sit at ninth in the Eastern Conference with a 4W-4L-2D record after falling 1-4 against New York Red Bulls II. The loss to Red Bulls II in Week 11 is the first loss on the road for Indy Eleven under first-year head coach Martin Rennie. The “Boys in Blue” controlled much of the first half. The visiting Eleven went into half time with a 1-0 lead thanks to a Soony Saad strike that found the top right corner in the 21st minute. Despite the strong first half, the second half proved to be in favor of Red Bulls II. The New York based team found the back of the net four times as the game finished 1-4.

Charleston Battery enter Week 12 placed third in the Eastern Conference with a 5W-2L-4D record after drawing with Nashville SC, 1-1, last Saturday. Charleston forward Ataulla Guerra leveled the game against Nashville in the 50th minute. Battery midfielder Jay Bolt played a square pass into the box that Guerra tucked into the bottom left corner. The Battery have won three and drawn two in their last five matches and conceded only two goals in the span. The South Carolina based team has also scored six times in the last five matches.

The “Boys in Blue” look to bounce back after a string of tough outings and a slew of absences that have kept key pieces of Rennie’s squad sidelined. The motto continues to be next man up as “Indiana’s Team” attempts to snag three points against visiting Charleston Battery.

Indy Eleven midfielder Juan Guerra continues an already-decorated career in 2018, joining “Indiana’s Team” for its inaugural USL season. Guerra has made five appearances for “Boys in Blue”, one of which came against New York Red Bulls II in Week 11. In his half hour on the pitch, Guerra moved the ball well, completing nearly 90 percent of his passes. With the squad rotating for various reasons, expect the experienced midfielder to continuing getting minutes.

Guerra played collegiately for Florida International University and has since gained experience with Venezuelan clubs Monagas SC and Caracas FC, the most successful club in Venezuelan history. The midfielder has four caps with the Venezuelan national team, including two call-ups for the 2014 FIFA World Cup Qualifiers. He was an integral part of the New York Cosmos midfield in 2017, scoring five goals and adding one assist in 27 starts.

Running an effective 3-4-3 usually entails a coach relying on a strong holding midfielder to control the tempo in the middle of the pitch. For Charleston Battery gaffer Mike Anhaeuser, this man is Tah Anunga. The Cameroonian regulates the Battery midfield, disrupting opposition charges and leading counter attacks off turnovers.

The 21-year old midfielder showed his defensive prowess against Nashville SC in Week 11. Anunga recorded six tackles and two interceptions bringing his season total to 45 and 22, respectively. The 21-year-old midfielder also moves the ball from the back third, through the middle, and into the front third. Nearly one third of the passes Anunga’s played this season have been in a forward direction.

Expect Anunga’s name to appear on the team sheet again against Indy Eleven, as he’s started and played every minute of the Battery’s first 11 games.

Indy Eleven and Charleston Battery both boast stingy defenses. The two teams are tied for second most clean sheets in the Eastern Conference with five. A big reason for their defensive presence has been the men between the posts.

Owain Fon Williams has manned the sticks for the “Boys in Blue” this season. The Welshman has conceded 11 goals in 10 games. Of those ten games, Fon Williams has conceded more than one goal only three times. His large frame has led him to 24 saves on the season, six of which came against Red Bulls II last Sunday. His performances have earned him multiple USL Save of the Week nominations, and one Save of the Week award for his victory securing a massive penalty save on the road against North Carolina FC. Look for Fon Williams to continue being big between the sticks on Wednesday.

Charleston Battery’s goalkeeper Joe Kuzminsky’s path to the starting goalkeeping position differs some from Fon Williams. Kuzminsky took over the starting role in Week Seven against Atlanta United 2. His first outing showed promise as the 24-year old shut out Atlanta in a 3-0 victory. His three saves in his first appearance this season has now grown to 14 in six appearances since the switch. He’s accounted for four of the five Battery clean sheets and has only conceded two goals. His performances have been even more impressive considering his backline consists of only three defenders.

With two impressive goalkeepers manning each team’s 18-yard box, the match-up between Indy Eleven and Charleston Battery may be a low scoring affair. Look for each keeper to come up big and make saves for their sides.

You won't want to miss a second of the action at Lucas Oil Stadium. Fans can still grab tickets to the mid-week fixture, kicking off at 7:00 p.m., starting at just $15 at IndyElevenTickets.com or by calling (317)685-1100.