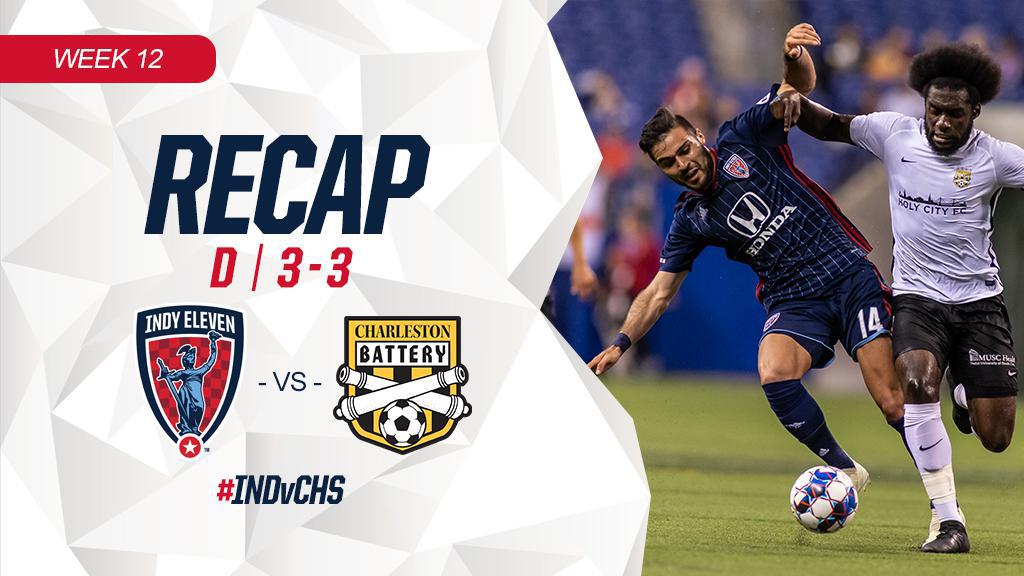 Indy Eleven draw, 3-3, and share a point at home against Charleston Battery. The six-goal thriller marks Indy's third draw of its inaugural USL season, and the team's first at Lucas Oil Stadium.

The “Boys in Blue” set their sights on an early lead. In the 12th minute, Indy midfielder Nathan Lewis juked around a Battery defender on the edge of the 18-yard box. The Trinidadian international chipped a cross to striker Soony Saad at the top of the 6-yard box. Saad's header nearly ended on frame, but the ball floated over the crossbar.

Charleston retaliated in the 39th minute. Battery midfielder Vincenzo Candela's free kick from the top-corner of Indy's 18-yard box almost found the head of defender Skyler Thomas for the first goal of the match. The square pass was ultimately punched out of play by Indy goalkeeper Owain Fon Williams.

Indy Eleven found the first goal of the match minutes later from another Saad stunner. In the 43rd minute, midfielder Brad Ring poised himself next to Saad close to 35 yards out for a free kick opportunity. Captain Ring pushed the ball forward as Saad ran up for his kick. The ball took a heavy curve outward before it swerved back to the near post and into the back of the net. Indy closed out the remainder of the first half with the single-goal lead.

Indy entered the second half on the hunt for a second goal in the 61st minute from forward Jack McInerney, before Charleston leveled a minute later. Battery forward Chris Wild shot from the top of Indy's 18-yard box off the counter attack. Eleven defender Brad Rusin attempted to block, which led the ball to take an awkward deflection into the box. Battery defender O'brian Woodbine capitalized on moment and sent the loose ball into the back of Indy's posts.

Six minutes later, Indy drew level once again with a penalty kick from defender Ayoze. “Indiana's Team” was awarded a penalty kick after McInerney was brought down in front of Battery's goal by Thomas. Ayoze stepped up to the spot and sent his kick to the upper-right corner of Charleston's net. Ayoze's penalty kick marks his third from the spot this season.

Indy's goal count didn't stop there. Ayoze found his second goal of the evening in the 93rd minute from a free kick outside of Battery's 18-yard box. The former La Liga defender lined up and sent his shot flying past Battery goaltender Joe Kuzminsky. This time into the upper-left corner of the goal.

Unfortunately, Indy's last-minute lead was short lived. In the 94th minute, Battery midfielder Tah Anunga netted the game's sixth goal and his team's equalizer after a pass from his teammate, Guerra, was left unattended in the center of Indy's 18-yard box. The whistle blew shortly after, and left the honors split.

“The goals we scored from the free kicks were literally as good as you’re gonna get,” said Indy Eleven head coach Martin Rennie. “The disappointing thing was losing the late goal, but the other goals too. We need to defend better and were disappointed with that. But it was an exciting game and fun to be a part of where we can take a lot from and build on.”

The “Boys in Blue” will return home next Saturday, June 9th, at 7:00 p.m. to take on fellow inaugural USL side Atlanta United 2. Fans can get tickets to the next home match starting at just $15 by visiting IndyElevenTickets.com or by calling (317)685-1100.