FOR CLUB AND COUNTRY

From growing up in Venezuela to representing his nation on the pitch, midfielder Juan Guerra shares his story 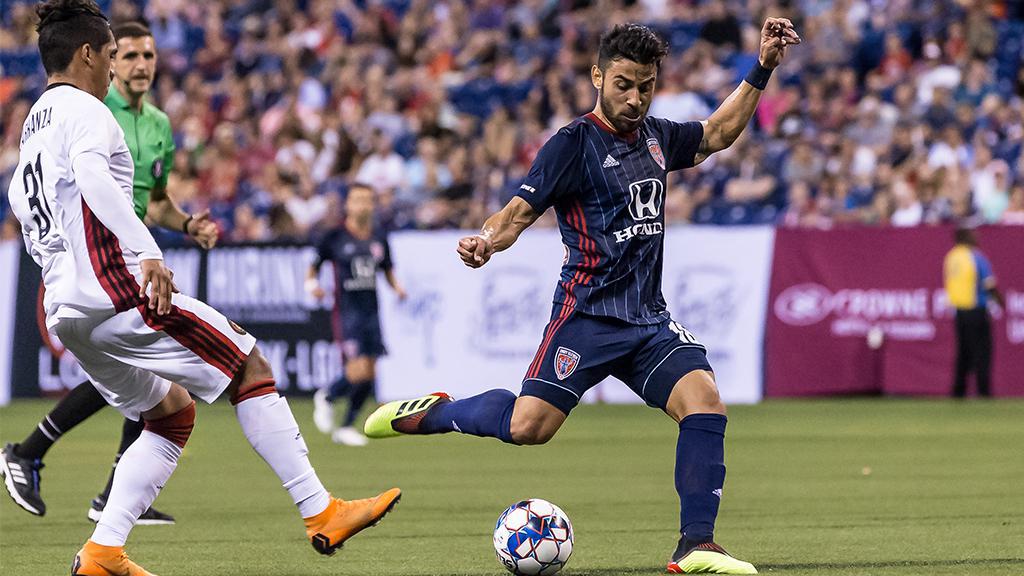 One of the greatest honors a player can receive is being called up to represent their country's national team. It's an opportunity many fight for, but only a handful experience in their playing careers.

For Indy Eleven midfielder Juan Guerra, it was a dream come true. He was asked to wear his country's colors in a series of qualifying rounds for Venezuela in the 2014 World Cup.

“My agent called me on the phone and said 'Listen, you'll probably want to check the newspaper tomorrow because your name is going to be on the list of 23 players that are going to play the next two World Cup qualifying matches.'” Guerra said.

His name first appeared on the Venezuelan National Team roster in the team's monumental 1-0 win over Argentina, a first in the nation's history. Though Guerra didn't feature, the young Venezuelan was floored to be there.

“I didn't get to play that game, but it was the first time that Venezuela beat Argentina in a World Cup qualifying match,” Guerra said. “It was great because I was with the first team.”

Soon after Venezuela defeated Argentina, Guerra received two additional call-ups to his country's World Cup qualifying matches against Columbia and Chile. Guerra made a second-half substitution appearance against Columbia, but didn't get any play time in the home game against Chile. Regardless, the experience was invaluable.

“I did get to play against Columbia and we tied. We were playing away in Barranquilla and it was great being in a full stadium of more than 60,000 people. Playing in a match against people like Falcao, James Rodriguez. It's an experience that I'm definitely never going to forget.”

While growing up in Caracas, Venezuela, Guerra's father would take him to see the Venezuelan National Team. which is often referred to as La Vinotinto, play in Barcelona, Venezuela, nearly 200 miles from their home.

In his youth, Guerra received first hand experience watching his idols play. Idols who would one day become his friends and his mentors. One of who was former New York Cosmos and La Vinotinto teammate Juan Arango.

“Juan was a main reference for all of us because he was one of the best players when I was young,” Guerra said. “He was one of the first players to get out of Venezuela and cause an impact in a main league around the world when he was playing in Spain.”

Former Venezuelan forward Giovanni Savarese, another idol, would later coach Guerra during his time with the New York Cosmos. A native of Caracas, Venezuela, Savarses played for top clubs around the world, which included stints with Major League Soccer's New York Red Bulls and the English Premier League's Swansea City.

“My dad used to take me to the stadium to watch the National Team play and some of the team's that Gio played for when he was in Venezuela,” Guerra said. “I would've never, ever have expected that after so many years we were going to develop such a good relationship.”

Guerra found his footing in the United States' professional system. He spent eight years in the US; four years in high school followed by another four years in college. During his collegiate career with Florida International University, he scored 15 goals in 44 appearances in his four-year stay. Guerra also spent a season with United Soccer League Premier Development League's Brooklyn Knights, where he scored four goals in 15 appearances.

In 2008, Guerra was drafted by MLS’ FC Dallas right after college, but was told after preseason he wouldn't be signed by the club. Unsure of his future, Guerra decided to return to Venezuela to play professionally. He signed his first professional contract with Primera Division 1. League club Monagas SC.

“It was tough at first,” Guerra said. “I had to go to a city with people I didn't know after being in the US for eight years. At the time, I knew I was doing it for a reason, and the reason was that I wanted to play professionally. I wanted to make it all the way.”

Removed from his comfort zone, Guerra made his on-field performance his main focus. Monagas’ manager at the time bestowed Guerra with the Captain's armband after six months. To Guerra, it was a sign he had made the right decision to return home.

“Being 21-years-old and being the team captain was an incredible responsibility and also gave me the confidence to know I could go all the way,” said Guerra.

Guerra finished his only season at Monagas with one goal in 21 appearances. While he wasn’t a prolific scorer with the club, Guerra's performance caught the attention of Venezuela's most successful club, Caracas FC. He signed for Caracas the following season and helped his hometown club claim another Primera Division 1. League title. His career blossomed from there.

“I played one year with Caracas and then got offered a contract to go play in Europe,” said Guerra. “After Europe, the National Team came, and so on, and so on.”

In 2012, 24-year-old Guerra had signed a contract for top-flight Spanish club, Las Palmas. He only featured once for Las Palmas, but the minutes he didn't get with his club was replaced with minutes on the pitch with the Venezuela National Team.

“I'm very glad that I made the decision when I didn't get picked by FC Dallas to go back home and started playing first division in Venezuela,” Guerra said.

Venezuela failed to qualify for the 2018 World Cup in Russia, which gives 31-year-old Guerra the ability to focus his energy on his first season with Indy Eleven and his son, Santiago. Attending training sessions and games has been the daily routine for Guerra's small family, ensuring 'Santi' is a part Guerra's journey as a player.

“As soon as I got married, me and my wife talked about it.” Guerra said. “I told her that I wanted to have kids while I was still playing, and I wanted to make sure that our kids see me play and share the same passion. I didn't want to have kids later on and to have to show them newspaper articles and to say 'This was me. I used to play.'”

Guerra's wish was granted. Guerra and his wife, Maria, often have to keep Santiago from sleeping in his Indy Eleven jersey, and refrain from telling him when games are to keep him from staying up at night out of excitement. It's become commonplace to see Santiago at the training grounds or on the field after a home match with a ball at his feet, happily dribbling back and forth.

Santiago is years away from a professional career, but the world is focused on the next generation of players.

In 2017, the Venezuelan National Team U-20 squad were runner-ups in the U-20 World Cup, falling to England's U-20 side 0-1 in the Final. Though they didn't win, it was the furthest Venezuela’s U-20 side had advanced in the tournament, having made it to the U-20 World Cup Second Round only once before.

In the last 15 years, Venezuela has experienced political, cultural and economic turmoil. Guerra believes the role of a National Team player goes beyond the impact one makes on the pitch.

As Guerra and his Venezuelan teammates age out, it's up to the next generation of athletes to take their places.

“My time and my process with the National Team has already passed,” Guerra said. “It's time for this new generation of kids that are young to get prepared for Qatar 2022.”