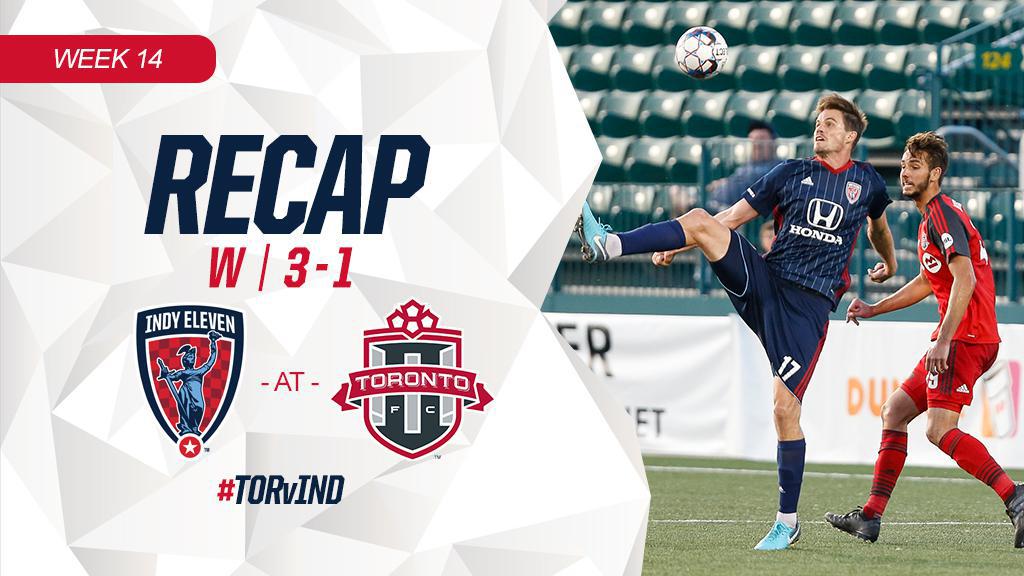 Indy Eleven pull away in a 1-3 victory against Canadian contenders Toronto FC II. The victory marks the first time the “Boys in Blue” have registered two consecutive wins in the 2018 season, which puts the team in fifth place.

The night started strong for both teams. Toronto made the first breakaway run into Indy's 18-yard box in the fourth minute. Defender Carlyle Mitchell did well to neutralize the early attack, one-on-one, which led Indy forward Justin Braun to make a similar run four minutes later.

In the 23rd minute, Venegas rushed up the right edge of the pitch unopposed after he gained the ball near center field. The former Minnesota United FC defender made a sharp turn into the edge of Toronto's 18-yard box and continued his run through the home side's defenses. Venegas slotted the ball past Toronto goalkeeper Gianluca Catalano from near post to give “Indiana's Team” the lead. The goal was Venegas' first since signing for Indy Eleven earlier this year.

Toronto came close to the night's first goal in the 16th minute after two chances from loose balls in front of Indy's goal, but Venegas and Mitchell ended the threat. Instead, Toronto settled for an equalizer five minutes after the “Boys in Blue's” opening goal.

Short passing play by Toronto forward Aidan Daniels saw striking partner Ayo Akinola bag his goal from distance in the 28th minute. The goal, which ended in the upper left of the corner of the net, was Akinola's third in 2018.

The stalemate didn't extend beyond the first half thanks to Braun. In the only minute of first-half stoppage time, Venegas forced a pass through a group of Toronto defenders in their 6-yard box to Braun, who was quick to shoot and score. The goal was Braun's first since his return from injury last August.

Indy widened its lead five minutes after half time with a headed effort from Braun. Passing play from midfielders Seth Moses and Matt Watson in the 50th minute saw service delivered to Braun inside the 6-yard box. Braun's header ricocheted off the bottom of the crossbar and over the line. The goal sealed the win for Indy.

Toronto almost pulled one back in the 94th minute with a wide strike from substitute midfielder Malik Johnson. The low strike skid toward the right post, which led to Indy Eleven goalkeeper Owain Fon Williams to dive for the save. The Welshman managed to keep the ball out by the tips of his gloves.

Though it was the players who scored the goals, Indy Eleven head coach Martin Rennie credits his coaching staff for their work behind the scenes.

The “Boys in Blue” hit the road again Tuesday, June 26, in a rematch against Nashville SC “Indiana's Team” will return home on Saturday, June 30 at 7:00 p.m., for Pride Night against Penn FC. Fans can get tickets to the next home match starting at just $15 by visiting IndyEleven.com/Tickets or by calling (317)685-1100.