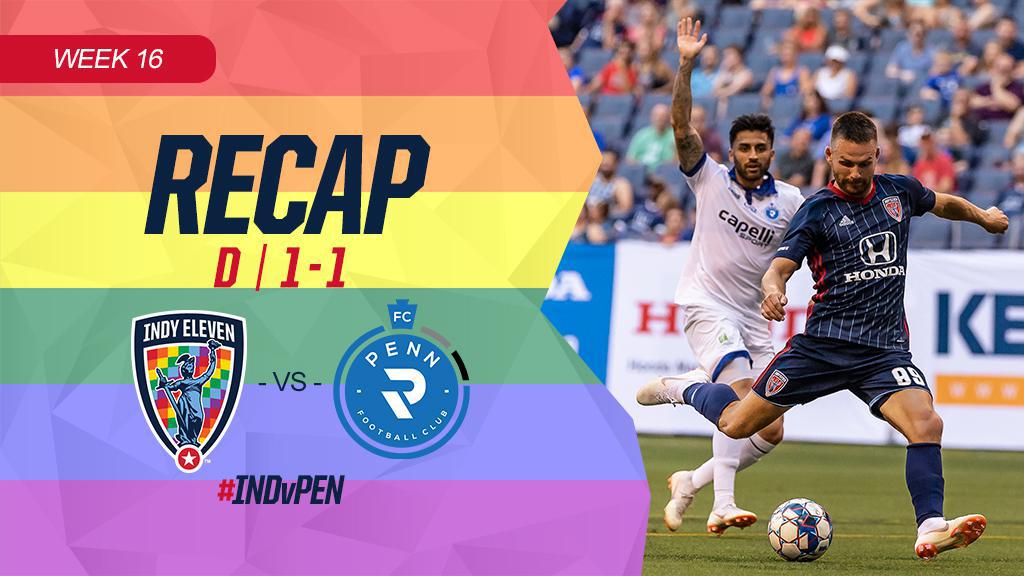 Indy Eleven make a comeback in the final minutes of the night to end level against Penn FC, 1-1. A goal in the 80th minute from forward Jack McInerney sees the “Boys in Blue” extend their undefeated streak to five matches.

Much of the action in the first half was found in the midfield as both sides traded possession. Both teams were able to make deep runs into each other's 18-yard boxes that resulted in easy clearances or pickups by both Indy Eleven goalkeeper Owain Fon Williams or Penn FC man between the posts, Romuald Peiser.

Indy came close to securing a first-half lead in the 27th minute. Eleven forward Justin Braun was on the receiving end of a passing play between midfielders Seth Moses and Matt Watson deep in Penn FC's defensive half. Braun jolted into the right edge of Penn's 18-yard box, followed by a quick pass inward. McInerney maneuvered quickly around Penn defender Kyle Venter to meet the ball with with a falling shot, but both players made contact with the ball to force it over the crossbar.

Ouimette's first yellow card in the 50th minute saw Penn awarded a controversial penalty kick. Ouimette and Penn forward Aaron Dennis locked legs near the top of Indy's 18-yard box. As both fell forward into the box, the match official blew his whistle and pointed to the spot. In the 51st minute, Penn forward Lucky Mkosana stepped up and buried his shot into the upper right corner of the goal as Fon Williams dove to the left.

As the match edged into the final 10 minutes playing down a man, Indy found the equalizer that salvaged a point. In the 79h minute, “Indiana's Team” was awarded a free kick nearly 30 yards from Penn's goal. McInerney took a right-footed shot, which sent the dead ball arching over Penn's defensive wall and into the lower left edge of the goal, just out of Peiser's reach. McInerney's goal brings Indy Eleven's total for the season to 20.

“We didn’t give up hardly any chances so I think we did that well,” said Rennie. “Obviously we scored a good goal and had a couple chances to score another but there’s always room for improvement. I think it’s positive for us to stay on an unbeaten run now for five games and look forward to the next one.”

The “Boys in Blue” return home for the second of three games this week on Wednesday, July 4 at 7:00 p.m., for Military Appreciation night against Ottawa FC. Fans can get 50 percent off tickets to Wednesday's bout by visiting IndyEleven.com/Military and using offer code “military18” when selecting seats.