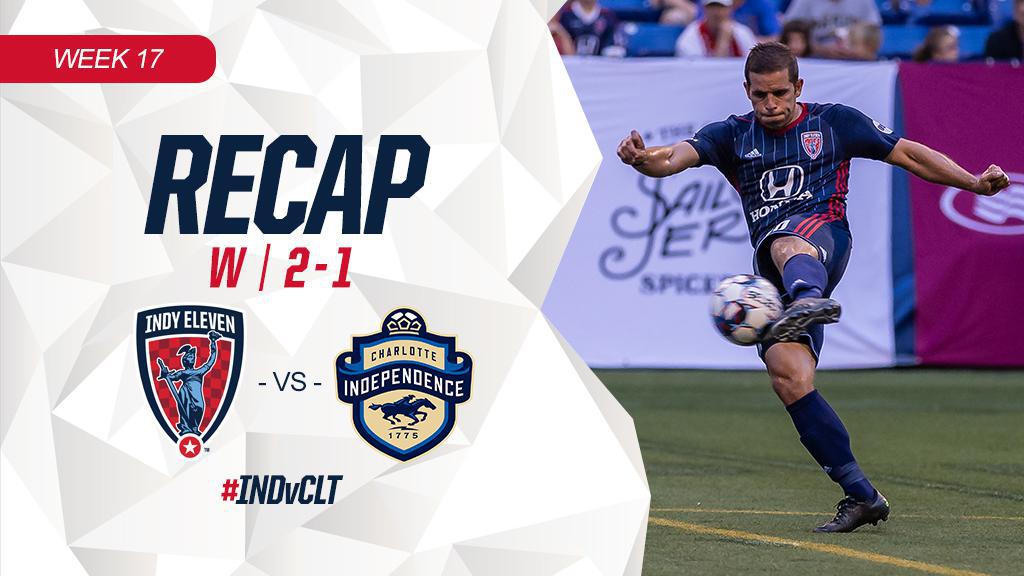 Indy Eleven close out their third home game in a seven day span with three points after downing a 10-man Charlotte Independence squad, 2-1. The “Boys in Blue” came back from a one goal deficit with strikes from forward Ben Speas and defender Carlyle Mitchell.

“We had a lot of adversity in that game,” said Indy Eleven head coach Martin Rennie. “We had two players go off in the first fifteen minutes, we lost a goal and were down, but we managed to keep fighting and get the win. We showed a lot of character and confidence and we’re really happy with that.”

The night started in favor of the visitors after “Indiana's Team” was forced to make two early substitutions within the first 20 minutes of play. The first of the two subs occurred in the 10th minute when Indy forward Justin Braun hobbled out of play while tracking the ball into Charlotte's 18-yard box. The speedy forward was immediately opted out of the game upon inspection from the team's medical staff. The second occurred seven minutes later when forward Eugene Starikov came on in place of defender Kevin Venegas.

Both sides had solid looks at goal in the first half, but neither side could find the back of the net.

Charlotte's first attempt came in the 15th minute. Independence midfielder Cordell Cato managed to settle a falling ball inside Indy's keeper's box. A slight nudge from Cato created an opportunity at goal for Charlotte forward and former Eleven frontman Eamon Zayed. The Irishman tried to catch Eleven goaltender Owain Fon Williams off his line but the the Wales international did well to deflect the strike up field.

Charlotte managed to find their lead in the 50th minute. A pass from Charlotte defender Sam Vines found forward Jorge Herrera's legs in the center of Indy's 18-yard box. The 37-year-old's right-footed strike from the top of the box split between Mitchell and defender Karl Ouimette and in goal near the right post. The goal placed Herrera as Charlotte's leading goal scorer with nine goals in 2018.

Charlotte's lead lasted 12 minutes before Indy's pressing resulted in a response from Speas. In the 62nd minute, Speas volleyed a shot past Charlotte goalkeeper Andrew Dykstra from a midair chain between defender Ayoze and Starikov. The goal marked Speas' first of 2018 and his first since August 26, 2017 against former rivals Jacksonville Armada FC.

The level scoreline turned into a lead for Indy in the 70th minute. A corner kick from Ayoze squared the pass to the top of the six-yard box where Mitchell headed the airborne ball into the upper left corner of the goal. The goal makes for Mitchell's second of the season, nearly mirroring his first against Atlanta United 2 in Week 13.

Charlotte made a last ditch effort to equalize in the 90th minute when Cato struck from the corner of the six-yard box. Fon Williams denied Cato's shot with a sprawling save, securing three points for the home team.

“Right now we’ll enjoy this game. Then, we’ll start thinking about Wednesday’s game,” Rennie said. “There is a little break after that which will be well deserved and well-earned but before that break we have to make sure we do well in the next game against Charleston.”

The “Boys in Blue” hit the road for the remainder of July. “Indiana's Team” will return to Lucas Oil Stadium on Wednesday, August 15 to take on North Carolina FC for Networking Night. Fans can get tickets by visiting IndyEleven.com/Tickets or by calling (317)685-1100.