PAINTING SUCCESS ON AND OFF THE FIELD

"Boys in Blue" Owain Fon Williams isn't just a skilled goalkeeper, but a talented painter, too 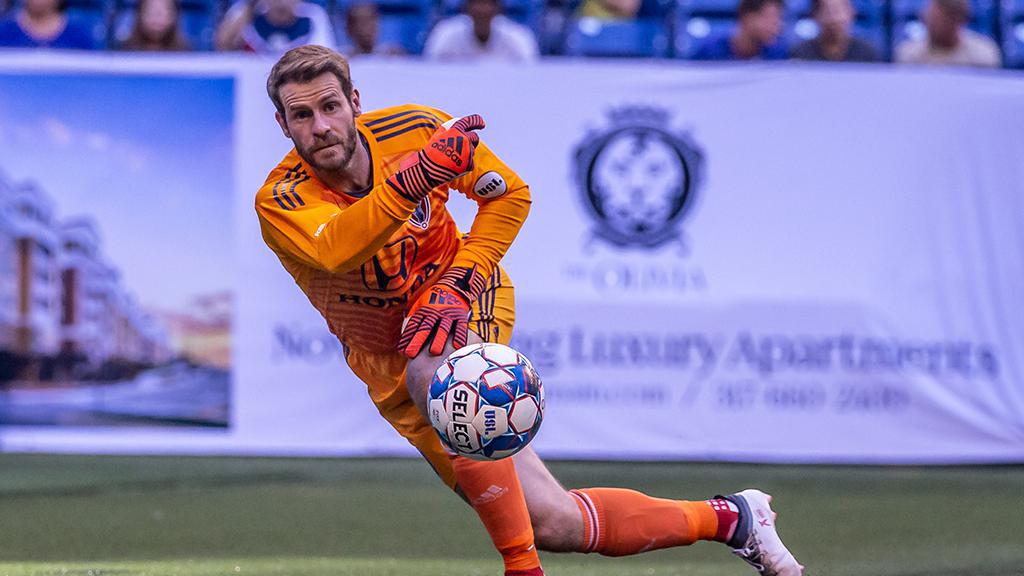 Owain Fon Williams grasped his palette in one hand. In the other hand, he gripped his paint brush as he stroked the canvas gently. As the assortment of colors blended together, grey mountains covered in white moonlight filled the frame. In the middle stood a quarryman, modeled after his grandfather, who inspired a series of Fon Williams’ paintings.

Fon Williams has painted as long as he can remember. He began painting as a child in the town of Penygroes, Wales, a small Welsh village with a total population of 1,793 people.

“My mom and dad would just give me paper and some paint and I used to paint away,” said the Welsh keeper. “I’ve done it since I was a kid.”

Fon Williams didn’t play FIFA and Fortnite during his adolescent years, instead he painted the majestic landscapes that surrounded his home in the Gwynned region of Wales.

“Growing up I didn’t have console games,” the Indy Eleven starting goalkeeper said. “I’ve been lucky enough to grow up in a lovely area with mountains and seascapes. Whether I painted whatever I was into or just goalkeeper gloves, I always wanted to paint something.”

His first serious painting was of a Highland bull. He took the painting to a local framing shop in Nantlle Valley, Wales. There he discovered the focus of the first half of his next collection of paintings – quarrymen.

“My grand-dad was one many years ago,” said Fon Williams. “The industry has died now but if anyone was to go to Wales, especially North Wales, you wouldn’t be able to walk two steps without seeing the blue slate and the work these men did many years ago.”

The other half of his works depict the goalkeeper’s time with the Wales National Team in one of Europe’s most renowned contests, the UEFA European Championship.

Wales made its first ever appearance in the tournament in 2016. The Dragons pushed on to the semi-finals of the 2016 Euros, defeating the tournament favorite, Belgium, in the quarterfinal.

“It was like a dream, to be honest,” the understudy to Wales International goalkeeper Wayne Hennesey said. “To beat Belgium in the quarter finals 3-1 showed the character and spirit we had in the team to fight back from down 0-1.”

Fon Williams’ and Wales’ Euro 2016 run came to end in the semi-finals. A strong Portuguese side ended the Cinderella run for Wales. Goals from Cristiano Ronaldo, who Fon Williams labled

“The Master”, and Nani defeated the small country from Southwest Great Britain.

If not for injuries to Welsh teammates Aaron Ramsey and Ben Davis, Fon Williams believes the outcome would’ve been different.

Despite the loss, Fon Williams focuses on the positive experiences of the Euros. He stays in touch with teammates from Wales’ 2016 Euros squad through WhatsApp.

“I’ve grown up with Aaron Ramsey, Joe Allen, Gareth Bale,” Fon Williams said. “We still keep in touch. That’s down to the bond we had with that kind of brotherhood. That gang-like mentality was kind of bred into us and made it so special.”

Fon Williams discovered more than a bond with his teammates at the Euros; he discovered a wealth of knowledge.

Coleman emphasized little goals that were set in place to help the team succeed. The Wales gaffer challenged the team to concede less free kicks, corner kicks, and crosses into the box if they were to advance.

Now on loan from Scottish Championship club Inverness Caledonian Thistle, the Welsh goalkeeper is bringing those little goals and that bond to Indy Eleven.

“When I joined here at Indy Eleven, we had a team gathering and the coaches spoke of the little goals Indy Eleven has,” Fon Williams said. “I know how something works with the little goals. Hopefully we can reach some of those goals.”

Completing game-to-game goals is a short term task for Indy Eleven, a team comprised of mostly new faces. What will take time for Fon Williams and the “Boys in Blue” is developing the chemistry the Wales National Team possessed in France.

“It’s not something you can buy that will happen overnight,” Fon Williams said. “We’re a new team. We’ve only been together a month or two. Some of us have never met each other let alone played with each other.”

Fon Williams believes responsibility and accountability on the pitch will help the team develop a strong core as Indy Eleven seek in their first ever USL campaign.

“That’s how that bond, that unity kind of starts,” Fon Williams said.
Five games into the season, the bond has grown stronger after every game as the new squad adjusts to life in Indianapolis.

For some players, coming to the Circle City was the benefactor of needing a place to play. For Fon Williams, a long-term stay in the States was a part of the plan for quite some time.

“It’s something I’ve always wanted to do,” said the Welsh International. “I’ve been coming here on holiday for about 10 years or more because I love the states, I love the people.”

Fon Williams attributes his move to the generous hospitality he’s experienced and the growth of the game. He planned to surround himself with good people and feels he has done that here in Indianapolis with Indy Eleven.

“The hardest part of the transition from life in Great Britain to life stateside has been the time difference,” Fon Williams said.

A change in his biological clock isn’t going to keep Fon Williams from taking Indy Eleven as far as he can.

“It’s a phenomenal team on the up that’s actually going to go somewhere,” Indy Eleven’s man between the sticks said. “I want to be as successful as I possibly can and I feel that Indy Eleven, as a team, have that fight in their belly.”

Fon Williams has performed well with “Boys in Blue” in five games. He’s kept a clean sheet in three of the five matches while only conceding two goals on the season.

After the final whistle blows and Fon Williams takes off his gloves, he goes back to the canvas. One of his goals as an Indy Eleven player is to paint a mosaic of Indy Eleven’s crest.

“If the supporters can fancy doing something with me, I’d like to do a mosaic of our crest, the Indy Eleven crest.”

It is a massive undertaking that will require extreme amounts of supplies, time, and effort, but a goal Fon Williams is determined to achieve.

“With something like art you can bring a lot of people together. If I can bring those people in and get them on board then happy day,” Fon Williams said.

The professional goalkeeper finds solace in painting. Rest and relaxation is the most important part of his recovery.

For Fon Williams, this is located in front of a canvas with a palette and brush in hand.

“I find it very therapeutic for me,” said Fon Williams. “Even if it’s only an hour or two that I can pick up my brushes, knives, or whatever and start painting, I can switch off and I’m fresh back into my work.”