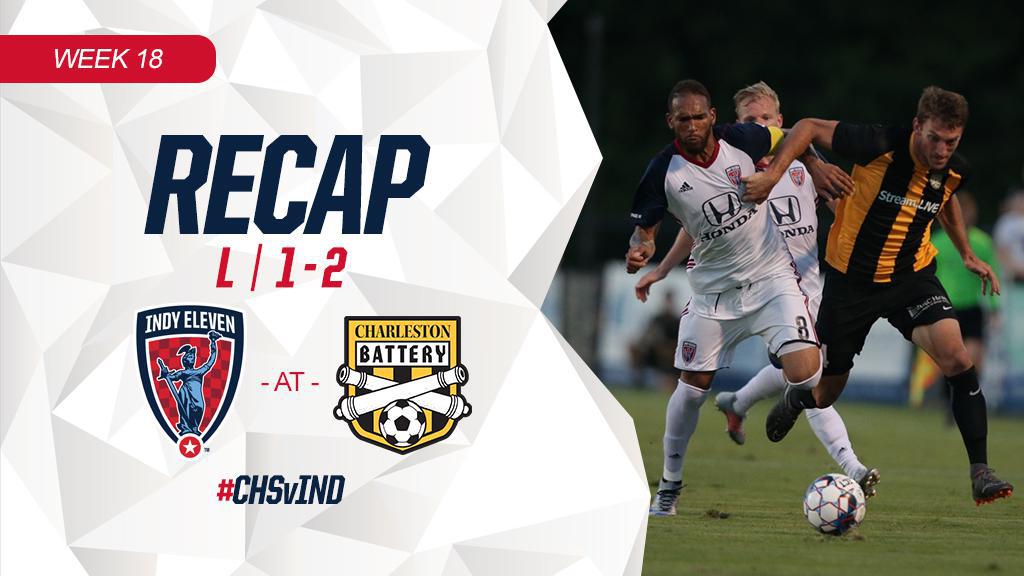 Indy Eleven fall to Charleston Battery in first away match-up of July, 2-1. Indy forward Eugene Starikov brought the Circle City side level, but couldn't fend off a brace from Charleston forward Gordon Wild.

It remained an even contest between both teams in opening minutes of the first-half. Charleston's attacking efforts saw numerous crosses played into Eleven goalkeeper Owain Fon Williams' box, but each ball was quickly batted up field or out of play. Indy attempted to ask similar questions, only to get a similar response from Battery keeper Odinsel Cooper.

The Battery claimed the upper hand after Wild netted his first of two goals in the 22nd minute. Battery midfielder Nick Rittmeyer made a short run along the right edge of the pitch in Indy's half before he laid the play off to Wild. With Indy midfielders Juan Guerra and Tyler Pasher closing in from behind, Wild found his mark from over 20 yards out. The shot made its way over defender Karl Ouimette and into the upper-left corner of the goal, just out of Fon Williams' reach.

A corner kick in the 30th minute from Eleven defender Ayoze nearly led to Indy's equalizer. The square pass found defender Carlyle Mitchell's head at the top of the six-yard box. A lucky save from Cooper narrowly kept the ball from crossing the line.

“Ultimately, I think both sides played pretty even in the first half,” said Indy Eleven head coach Martin Rennie. “It was really hot, so that affected both teams a little bit. The reality is that Charleston scored a great first goal from distance and we came close to scoring in the 30th minute.”

The halftime break seemed to be just what “Indiana's Team” needed.

Indy found the leveling-goal 12 minutes into the second half. A through pass from Eleven forward Ben Speas rolled between Charleston's backline to striking partner Starikov. The Ukrainian took one touch to chip over Cooper as the keeper came way off his mark to send the ball bouncing into the back of the net in the 57th minute.

Indy's continued pressure came close to another goal for the visiting side. An angled shot from second-half substitute Soony Saad took a favorable deflection off Cooper's leg and back to the Eleven forward's feet. Another shot on frame looked all but in, until Battery defender Taylor Mueller's quick actions kept the goal line clear.

Both sides continued to fight for a goal, but it was the Battery that would ultimately find the match winner in the 84th minute. A pass from forward Jarad van Schaik from centerfield connected with Wild as he ran toward the upper-left corner of Indy's 18-yard box. Eleven defender Seth Moses attempted to take on Wild one-on-one, but the striker managed to edge around to put a left-footed shot between the posts. Wild's second goal of the evening made for his sixth overall in 2018.

Wild made one last attempt to complete a hat trick in the 94th minute, but Fon Williams kept the low shot from getting past his tall frame.

“I was very pleased with the way that we played,” Rennie said. “We played much better in the second half. We had a lot of really good chances at goal and we looked dangerous. We showed a lot of hunger and energy, but overall, we over-committed and got punished for it. We have to learn from our mistakes.”

The “Boys in Blue” are on road for the remainder of July. Indy Eleven will take to the pitch once more on Saturday, July 21 at 7:00 p.m., to take on the Tampa Bay Rowdies. “Indiana's Team” will return to Lucas Oil Stadium on Wednesday, August 15 to take on North Carolina FC for Networking Night. Fans can get tickets by visiting IndyEleven.com/Tickets or by calling (317)685-1100.