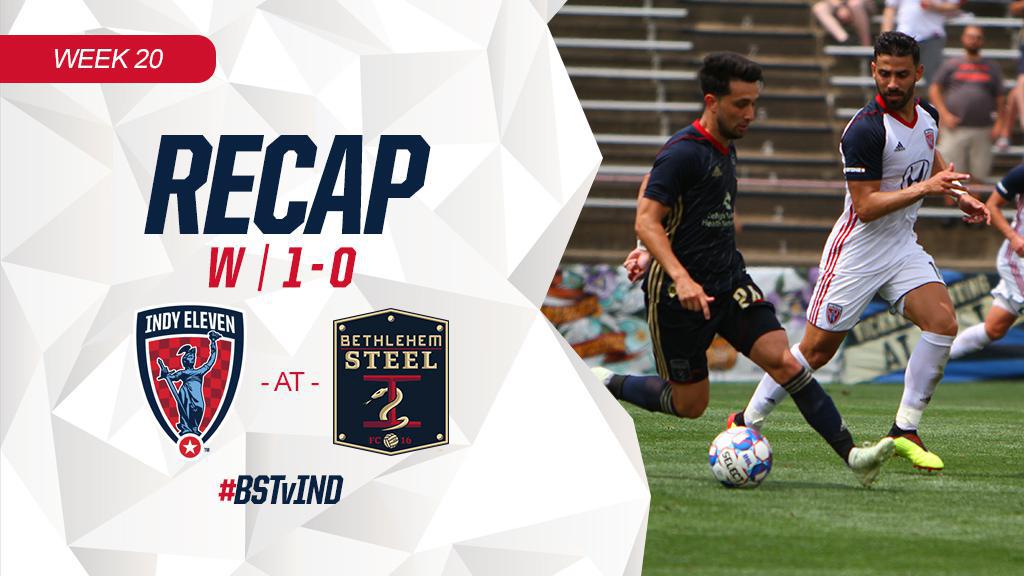 Both sides found goal scoring opportunities in the first half, but neither team could rise to the occasion. Great passing play by the “Boys in Blue” led to scoring opportunities for midfielder Zach Steinberger and forward Eugene Starikov within the first 15 minutes. Unfortunately, both chances were collected by Steel goalkeeper Jake McGuire and ended out of play, respectively.

Steel FC responded immediately with back-to-back chances from midfielder Michee Ngalina and forward Faris Pemi Moumbagana. Ngalina looked to make his mark at distance in the 15th minute, but the long shot was easily scooped up by Eleven keeper Owain Fon Williams. Four minutes later, Faris maneuvered into Indy's box on a solo run. Though in a dangerous position, Faris' lack of teammates in the area resulted in the young forward losing possession before getting a shot off.

The second half started much like the first as both teams fought to find the first goal. Both of Bethlehem's best chances were kept from the back of the net thanks to Fon Williams. In the 70th minute, second-half substitute midfielder Chris Nanco ripped his shot from the top of Indy's box after beating Eleven captain Matt Watson. The shot was deflected away near the left post after Fon Williams got a hand on it. Fourteen minutes later, Steel midfielder James Chambers fired in a low free kick inches out from Indy's 18-yard towards the center of the goal. Power lifted off the shot, which gave Fon Williams time to fall for the save.

Indy found the game-winning goal two minutes after Chambers' free kick. From the corner, Eleven midfielder Zach Steinberger fed in a square pass near the top of the six-yard box, where McInerney then nodded the cross into the upper right corner of the frame. The goal marks McInerney's fourth on the season. Steinberger's assist makes the second time he's been involved in scoring against Bethlehem Steel in 2018.

"Obviously we know that [Jack] is a really talented player and a very dangerous striker,” said Indy Eleven head coach Martin Rennie. “Having him come on fresh when other people were tired gave us that lift and boost at the right time and he got us a really important goal.”

The heated contest came to a close after a staggering six minutes of stoppage time, bringing an end to Bethlehem's eight-match unbeaten streak at home.

“I was really happy that we got it; To get it late in the game and then managed the game quite well at that point,” said Rennie. “Very happy to win. that’s probably one of their first defeats at home apart from when they had a man sent off early. This is a franchise record fifth win for us on the road. It was a good day for us.”

The “Boys in Blue” are on road once more on August 5 in a rematch against 2017 USL champions Louisville City FC. Ten days later, “Indiana's Team” will return to Lucas Oil Stadium to take on North Carolina FC for Networking Night. Fans can get tickets to the match on Wednesday, August 15 at 7:00 p.m. by visiting IndyEleven.com/Tickets or by calling (317)685-1100.