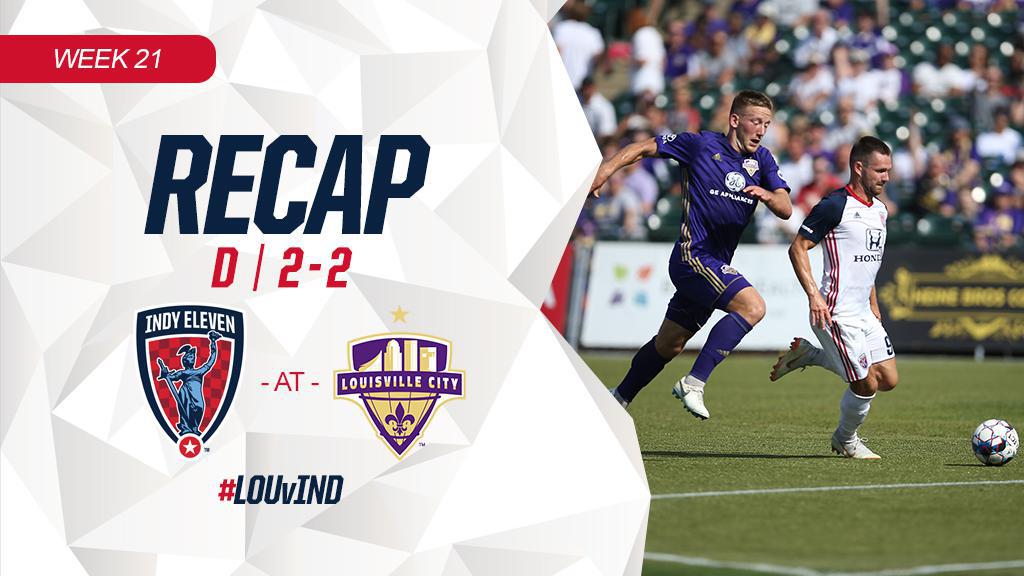 Louisville City FC came close to scoring in the opening moments of the match. City midfielder Brian Ownby stepped up for a penalty kick in the sixth minute after earning the opportunity a minute earlier. The former University of Virginia standout's shot flew towards the center of Indy's goal where Eleven goaltender Owain Fon Willams did well to deflect the chance. The loose ball fumbled around Indy's crowded six-yard box before it was cleared by defender Carlyle Mitchell.

The Circle City squad responded with the opening goal 10 minutes after City's first look at the scoresheet. Eleven defender Kevin Venegas fed a cross into the 18-yard box from the right edge of the field. A poor deflection off of City defender Craig Paco's head set the play for McInerney to nod fthe ly ball past Louisville keeper Greg Ranjitsingh.

“Indiana's Team's” lead was short lived. A minute after Indy's goal, City's Ilic caught Fon Williams' off balance with a low shot to the bottom right corner of the goal. The attempt was put on frame with a low cross by Louisville midfielder Magnus Rassmussen.

The score stayed level for four minutes before Indy found the lead once more. In the 21st minute, McInerney barely got on the end of midfielder Matt Watson's through pass in City's 18-yard box. The former LA Galaxy forward nudged the ball just enough to skid around Ranjitsingh for the lead. The goal marked McInerney's second of the night, third in the last two matches and sixth on the season.

“It took awhile to get his sharpness because he hadn't played too much last season,” said Indy Eleven head coach Martin Rennie. “I think he’s doing well now. If we give him chances, he’ll score.”

The “Boys in Blue” carried the lead well into the second half, until Louisville found their second equalizer of the night. In the 59th minute, Ilic linked up with Davis IV outside of Indy's 18-yard box. Davis IV's shot drilled through Indy's backline and into the bottom right corner of the net. The goal marked Davis IV's 50th overall of his USL career.

Determined to win, Indy Eleven found one more solid opportunity after winning a penalty kick in the 73rd minute. Eleven forward Eugene Starikov looked to make his mark a minute after the initial challenge. The Ukrainian came close to registering his third goal of the season with a shot towards the lower left corner, but a Fon Williams-esque save from Ranjitsingh kept the strike from crossing the goal line.

Indy made several more runs into Louisville's box, but couldn't finish any chances before the final whistle. The match concludes a long stint away from home for Indy Eleven, collecting six out of 12 possible points in the last four away matches.

“It’s a hard game to come away from home. I think we performed very well,” said Rennie. “We definitely did enough to win the game. We finished the game very, very strong. You know, it’s disappointing not to win, but at the same time it’s a good performance, a good point. I think we can take a lot of positives from it.”

After nearly a month on the road, “Indiana's Team” returns to Lucas Oil Stadium to take on North Carolina FC for Networking Night. Fans can get tickets to the match on Wednesday, August 15 at 7:00 p.m. by visiting IndyEleven.com/Tickets or by calling (317)685-1100.