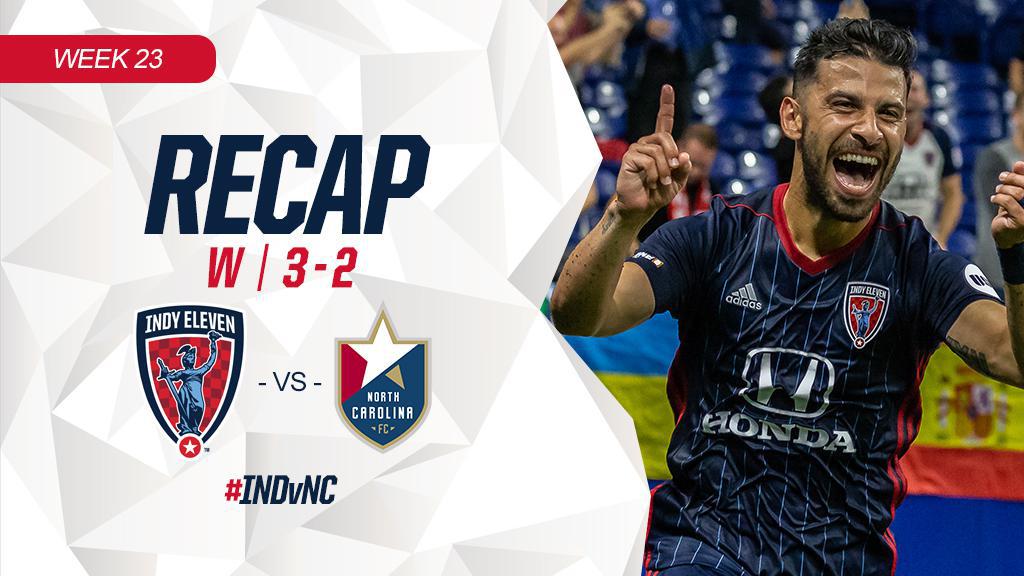 “Indiana's Team” gained the upper hand early in the evening. A well-placed cross from Eleven forward Jack McInerney from the right edge of the pitch found Starikov at the top of Carolina's six-yard box in the seventh minute. The Ukrainian forward scored his third goal of the season after his sliding shot edged around NCFC defender DJ Taylor. McInerney nearly got the first a minute prior after service from defender Kevin Venegas found him in front of NCFC's goal, but a misplaced touch sent the attempt just wide of the post.

“He [Starikov] was out for two and a half months. You didn’t get to see him and we didn’t really get to use him.” said Indy Eleven head coach Martin Rennie. “Now we’re seeing the benefit of having him on the field and he’s scoring.”

After a number of offensive pushes, NCFC came close to leveling the one-goal lead in the 21st minute. NCFC midfielder Kyle Bekker linked up with unmarked midfielder Marcel Kandziora inside Indy's 18-yard box. Attempting to catch Eleven keeper Owain Fon Williams off his line, Kandziora chipped his shot high towards the net. The Welshman managed to get a touch, but it wasn't enough to divert the ball from goal. The score looked to be even before a miraculous goal line clearance from Eleven defender Carlyle Mitchell kept the ball from crossing over. Kandziora came knocking again in the 28th minute with a shot 19 yards out, but ended wide of Indy's frame.

Indy responded to NCFC's onslaught of chances by doubling its lead. In the 31st minute, Venegas bodied the ball away from Kandziora in Carolina's defensive half. Speas waited nearby to receive the turnover. With three quick touches, Speas registered the match's second goal, and his third in 2018, from 27 yards out.

“It was a spectacular goal and he’s capable of that and we just want to see him on the ball more,” said Rennie. “He defended a lot too.”

Refusing to end the first half scoreless, North Carolina narrowed the gap with a stoppage time free kick. The free kick opportunity came after a yellow card offense from Mitchell outside Indy's 18-yard box. The linesman blew his whistle as defender Aaron Guillen and Bekker stood over the dead ball. Guillen charged past the ball as Bekker curled his shot into the lower left corner of Indy's net.

Both teams found and left chances in front of goal throughout the second half until NCFC hit its equalizer in the 77th minute. Carolina substitute defender Wullito Fernandes' square pass bounced into Indy's six-yard box where substitute forward Marios Lomis nodded the ball between the posts.

In dramatic fashion, Indy managed to net one final goal, and the winner, in the 90th minute when Juan Guerra made the most of a deflected shot inside NCFC's 18-yard box. The goal was Guerra's first since joining the “Boys in Blue” earlier this year.

“It was a much better game tonight and there was much more passing and interchanging,” Rennie said. “The surface does play a lot better so that’s one big plus. The players made the most of it and I thought they did a good job.”

Indy hit the road three days from now to take on Ottaway Fury FC for the second time in 2018. Shortly after, the “Boys in Blue” return to home turf once again to face Toronto FC II on Wednesday, August 22, at 7:00 p.m.. Fans can get tickets to the midweek fixture by visiting IndyEleven.com/Tickets or by calling (317)685-1100.