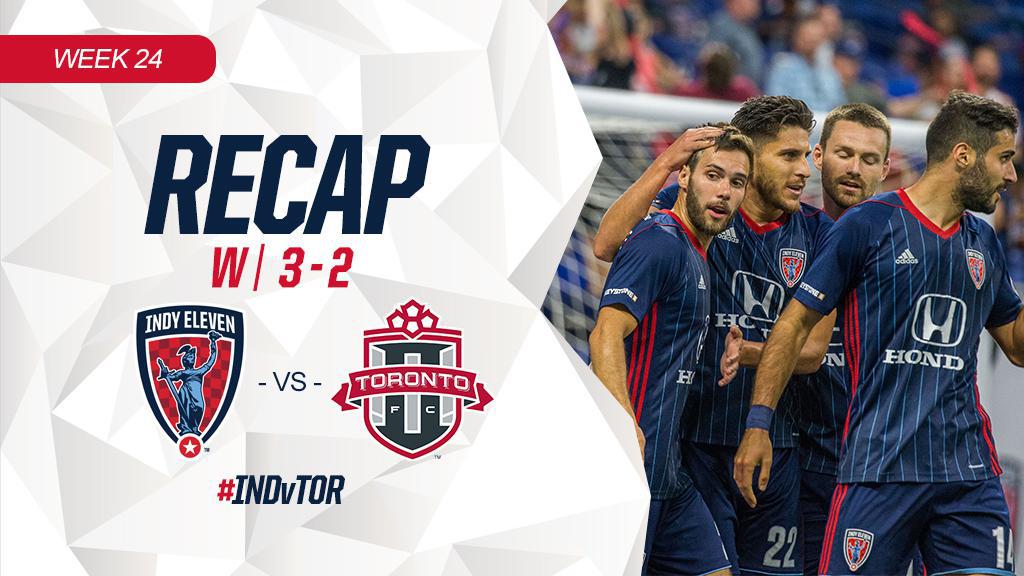 Indy Eleven come away with three points at home after defeating Toronto FC II 3-2, for the second time this season. The win marks “Indiana's Team's” third consecutive win at home, two of which came after a four-match stint on the road.

The new turf seems to be the key difference in Indy Eleven head coach Martin Rennie's side. Six goals have been scored over the last two matches. Last Wednesday was the first time Indy Eleven played on the new turf following the team's previous 2-1 win over Charlotte Independence on July 7.

Toronto started seeking out chances in the early minutes, but it was Indy forward Ben Speas who found the first goal of the match. Speas sank his shot from the center of Toronto's 18-yard box with his first touch in the 18th minute. The goal was assisted by service from Eleven midfielder Nico Matern with a 36-yard pass from Indy's own half. The goal was Speas' third of the season, scoring all three in the last three home matches.

Five minutes, later Eleven forward Jack McInerney delivered the “Boys in Blue's” second goal. Striking partner Soony Saad played a square pass to the middle of Toronto's penalty area. TFCII defenders Tim Kubel and Lars Eckenrode both attempted to settle, but a poor giveaway rolled in place for McInerney to hammer in the lower left corner of the net. The 26-year-old currently sits atop Indy's goal scoring chart for 2018 with seven to his name, tallying four in the last month.

Toronto continued to test Eleven goalkeeper Owain Fon Willaims. Their efforts proved fruitful with two goals to level the score before the end of the first half. Toronto's first goal occurred in the 29th minute with a free kick at the top of the 18-yard box by midfielder Tsubasa Endoh. The Tokyo, Japan native placed his shot over Indy's defensive wall with pinpoint accuracy into top left corner of the goal. The goal was Endoh's first since signing for Toronto on August 2.

Toronto's equalizer was struck by Jordan Hamilton 30 yards out from goal in the 34th minute. Hamilton's opportunity came after miscommunication between Speas and Eleven midfielder Matt Watson resulted in a loose ball. The distant strike was Hamilton's fourth of the season and his 12 with Toronto FC II since 2015.

Indy original and returning midfielder Dylan Mares reopened his account with the game-winning goal in the 58th minute. Saad's pass in the midfielder split through Toronto defenders to a backtracking Mares. A lengthy, unopposed run by Mares led to his shot at the top of Toronto's penalty box. The strike flew by TFCII keeper Caleb Patterson-Sewell as he dove for the save in the right side of the goal.

“Ben [Speas] was on my left side and he drew some people away and so did Soony [Saad],” Mares said. “Soony stretched them and they just kept moving back and back and it allowed me to open up and pick out the side net. It was well done by everyone else. They gave me the space to create an opportunity.”

“Indiana's Team” has 3W-2D record in its last five matches, collecting 11 out of 15 possible points. The win sees Indy remain in sixth places in the Eastern Conference standings as they continue to push for playoff contention.

The “Boys in Blue” hits the road again this Saturday, August 25, to face Atlanta United FC 2. Indy will return home on Wednesday, August 29th against Pittsburgh Riverhounds to kick off a three-home game stretch in a seven days. Fans can get tickets to the upcoming home fixtures by visiting IndyEleven.com/Tickets or by calling (317)685-1100.