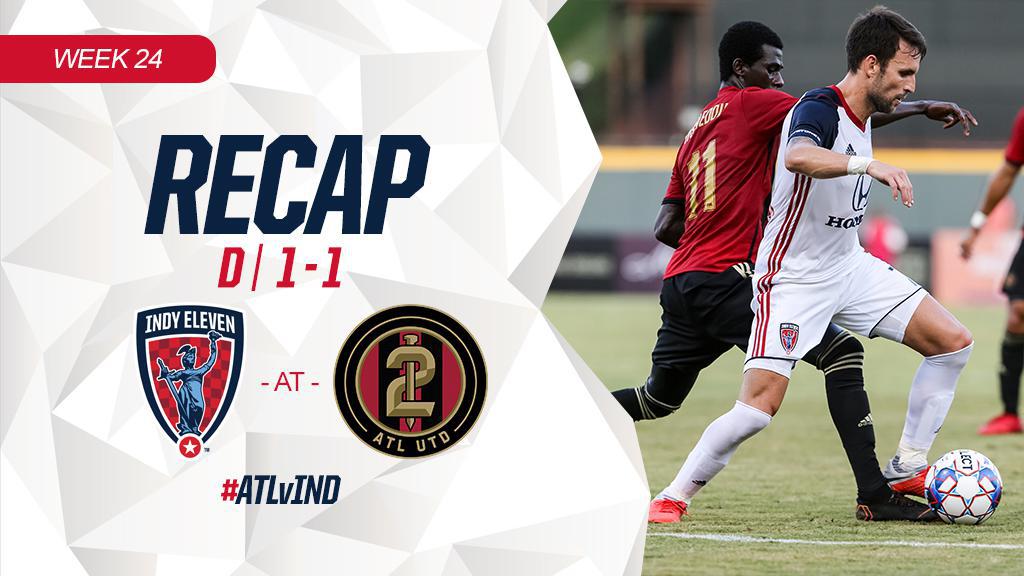 Indy Eleven share points on the road after dramatic equalizer from Atlanta United 2. The 1-1 result sees Indy collect 12 points in the last six matches with a 3W-3D record.

“Obviously it’s an end to the game that’s far, far from what we would’ve wanted, but as I look at the performance overall it was solid,” said Indy Eleven head coach Martin Rennie. “We can take from the fact that we’re six games unbeaten. That should’ve been three points. We feel disappointed for not getting it, but we have to keep the positive momentum going and get ourselves continued on that run.”

The match remained scoreless by the end of the first 45 minutes after Indy held off Atlanta's high pressing offense. The MLS 2 team used passing lanes along the wings in an attempt to catch Indy off guard on breakaway runs. However, the “Boys in Blue” challenged Atlanta with counterattacks and switching plays to create central space. Offensive pressure from both sides saw Eleven goalkeeper Owain Fon Williams and Atlanta United 2 keeper Mitch Hildebrandt forced to make saves in the 22nd and 45th minutes, respectively.

“Indiana's Team” found the opening goal of the night in the 53rd minute after back-to-back chances following the break. Eleven defender Ayoze provided in-swinging service from the corner to defensive partner Karl Ouimette inside Atlanta's six-yard box. The goal was Ouimette's second of the season after he scored his first in Nashville on June 26 off a header that was also played in from the corner by Ayoze.

Atlanta continued to pressure Indy's backline, finding their best look at goal in the 71st minute. Former Notre Dame forward Jon Gallagher was on the end of a through ball and hammered a low strike past Fon Williams, but was cleared off the goal line by defender Kevin Venegas. Unfortunately, a defensive error in the sixth minute of stoppage time led to the open-net equalizer by Atlanta United Academy product Dylan Gaither to open his USL account.

“Take away the last two seconds of the game and it’s probably a pretty solid road performance,” Rennie said. “But those two seconds, we can’t take them away and we have to take a point instead of three.”

Tonight concluded Indy's fourth game of seven in a 22 day span. The “Boys in Blue's” next three fixtures will take place in the Circle City at Lucas Oil Stadium.

“We’ve got three home games coming up” said Rennie. “We’ve been attacking well and scoring a lot of goals at home, so I think we’re excited about getting these home games.”

Indy Eleven return home on Wednesday, August 29th at 7:00 p.m., to take on Eastern Conference powerhouse Pittsburgh Riverhounds. Fans can get tickets to the upcoming match for as low as $15 by visiting IndyEleven.com/Tickets or by calling (317)685-1100.