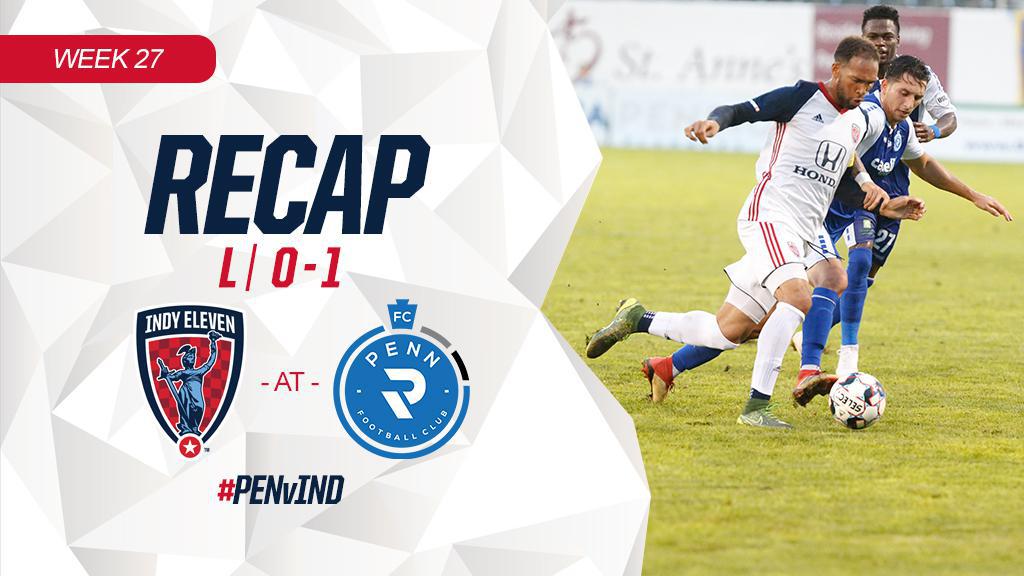 A rough night for Indy Eleven as they fall on the road to Penn FC, 0-1. A second-half goal by Penn midfielder and former “Boys in Blue” midfielder Paulo Junior saw Indy’s unbeaten streak halted at nine. The loss marks the first for the Circle City side since falling on the road to the Tampa Bay Rowdies on July 21.

“It was a game where I thought that in the first half we actually played quite well,” said Indy Eleven Head Coach Martin Rennie. “We created a few decent openings, but we didn’t manage to take chances that we had created in the half.  We felt that overall the conditions were quite difficult, and I think they [Penn FC] adapted and adjusted to those conditions a little better than we did.”

Both sides held off minimal scoring opportunities throughout the first half. Penn came out strong with a solid first look at goal in the eighth minute by forward Aaron Dennis that went just wide of the right post. Nine minutes later, Penn midfielder Richard Menjivar played an in-swinging cross from the corner to the top of Indy’s six-yard box, where defender Tiago Calvano leapt up for a header. The Penn Captain’s attempt narrowly missed its mark as it lofted out around the left post.

Where Penn asked questions, Indy responded. Indy’s first look at goal came in the 25th minute when defender Ayoze’s 40-yard free kick rocketed towards goal. Though the cross was on target for goal and for defender Karl Ouimette to follow up with a header if necessary, Penn goalkeeper Romuald Peiser managed to get his gloves on the ball first. Forward Eugene Starikov, who scored two of Indy’s three goals last time out, followed up with an attempt four minutes later. The 29-year-old controlled a cross by Eleven goaltender Owain Fon Williams deep into Penn’s half for a chip over Peiser, only for the shot to veer around the back post.

Eleven forward Jack McInerney had his sights set on the leading goal in the opening moments of the second half on a breakaway play, but the striker’s low shot was denied. Seth Moses found a similar chance at distance in the 82nd minute, but the low strike flew directly into the keeper’s arms.

Though Penn had several opportunities in the second half, the Harrisburg based side managed to only capitalize on one chance in the 57th minute.  Paulo Junior beat the ball around Eleven defender Reiner Ferreira with a slight touch, freeing the former “Boys in Blue” midfielder for a shot to the far post. The goal, assisted by Penn defender Harri Hawkins, was Paulo Junior’s third since joining Penn in June.

“I think ultimately we lost the game because Paulo Jr. got free and scored a good goal.  There wasn’t really too much between the teams other than that,” Rennie said. “Obviously we are disappointed tonight because it didn’t go our way.  It was the first time that we have lost in a long time, so we need to brush ourselves off and now come back and go on a really good run between now and the end of the season.”

The “Boys in Blue” are on the road again 10 days from now to take on Pittsburgh Riverhounds SC. After that, “Indiana’s Team” return home on Wednesday, September 26, for Faith and Family Night against the Tampa Bay Rowdies. Fans can buy tickets to the midweek match at IndyEleven.com/Tickets or by calling (317)685-1100.