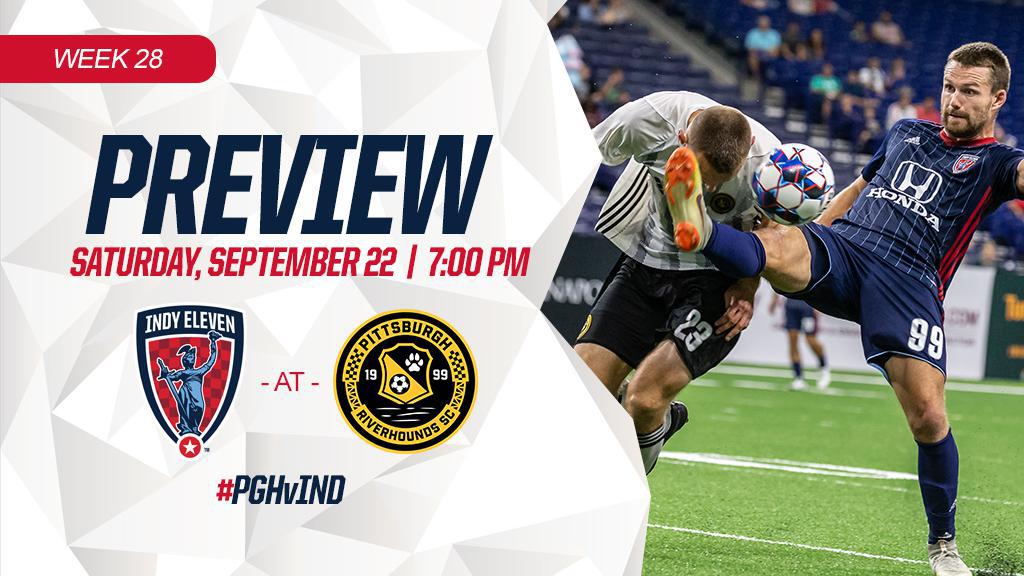 Week 28: Down to the Last Five Matches

Indy Eleven’s inaugural 2018 USL season dwindles down to its last five games, as the “Boys in Blue” take on Pittsburgh Riverhounds SC in both team’s third matchup of the season. Only five points separate the two sides, who’ve drawn both matches they’ve played against each other this season.

Indy Eleven (12W-8L-9D) remain fifth in the Eastern Conference with 45 points after suffering their first loss since going nine games undefeated. Penn FC scored the lone goal in a 1-0 defeat in the 57th minute. The “Boys in Blue” conceded their 34th goal to Penn FC midfielder Paulo Junior, after a shot from the right side of the 18-yard box deflected off Indy goalkeeper Owain Fon Williams’ hand and into the net. Leading goal scorers and forwards Jack McInerney (9) and Eugene Starikov (5) were unable to add to their tally. “Indiana’s Team’s” road record drops to 5W-4L-5D after the defeat. Indy has scored and conceded 14 goals on the road in 2018.

Pittsburgh Riverhounds SC (13W-4L-11D) are currently third in the Eastern Conference with 50 points after a late comeback led to a 2-2 draw against Louisville City FC. A Louisville City own goal got the comeback started in the 86th minute. Five minutes later, forward and Captain Kenardo Forbes leveled the game with a spot kick and his third goal of the season. Leading goal scorer and forward Neco Brett (14) was unable to find the back of the net in the draw. Pittsburgh goalkeeper Daniel Lynd couldn’t add another clean sheet to the 11 he’s tallied in 2018. Pittsburgh returns home, where they possess an 8W-2L-6D record.

A victory against Pittsburgh would mean Indy would be victorious in the series, as either side is yet to defeat the other.

The last time Indy Eleven faced Pittsburgh Riverhounds SC, late theatrics from forward Jack McInerney rescued a point for the “Boys in Blue”. McInerney scored a brace in the last fixture against Riverhounds SC. One of those goals came in the 94th minute, when he clinically finished a ball played in by midfielder Ben Speas.

McInerney has been the forward in form as of late. He leads “Indiana’s Team” in scoring with nine goals total, six of which came in the last 10 games. The 26-year-old will need to find that form again against the toughest defense in the Eastern Conference if the “Boys in Blue” are to come home with three points.

Pittsburgh Riverhounds SC forward Christiano François hasn’t been the star forward for the Riverhounds, but has positively impacted games in a quiet manner. The forward has only found the back of the net four times during the 2018 season, but has found a way to impact games when his team needs him most.

For example, in Indy Eleven’s second fixture against Pittsburgh, François played in a perfectly weighted free kick that found the head of teammate Joseph Greenspan to level the game at one. Francois also scored the goal that gave Riverhounds SC a 2-1 lead in the 59th minute, when Brett was having a quiet night. The odds of Brett having another quiet night are most likely low, but if he does, François will be there to pick up the slack.

Indy will face Riverhounds SC at Highmark Stadium in Pennsylvania, where the Riverhounds have only conceded six times on their way to an 8W-2L-6D home record. The Pennsylvania team has conceded a total of 19 goals in 2018, the least of any USL side and earned 15 clean sheets, the most of any USL side. Despite the solid record defensively, the side’s defense has been trending downward lately.

In the first 23 games of the season, Pittsburgh conceded 11 goals and earned 15 clean sheets. In the last five games, they’ve conceded eight goals and kept zero clean sheets, the worst of any five game stretch in 2018. The Riverhounds also conceded more than one goal only three times in their first 23 games. The Quaker State side has equaled that number in the last five, allowing two goals a total of three times. One of the games where Riverhounds allowed more than one goal was in the Week 25 matchup against Indy Eleven.

This is good news for Indy head coach Martin Rennie. It means his streaking offense should be able to break down the Riverhounds back line. Rennie will still need to be careful defensively though. Riverhounds SC has scored 22 of their 38 goals at home in 2018. They also possess the third highest goal scorer in the Eastern Conference in forward Neco Brett and the man with the fourth most assists in the East in midfielder Kenardo Forbes.

Don't miss a second of the action! Fans can catch all Indy Eleven matches online on ESPN+ for just $5 a month. New users can access a seven-day free trial by visiting plus.espn.com.