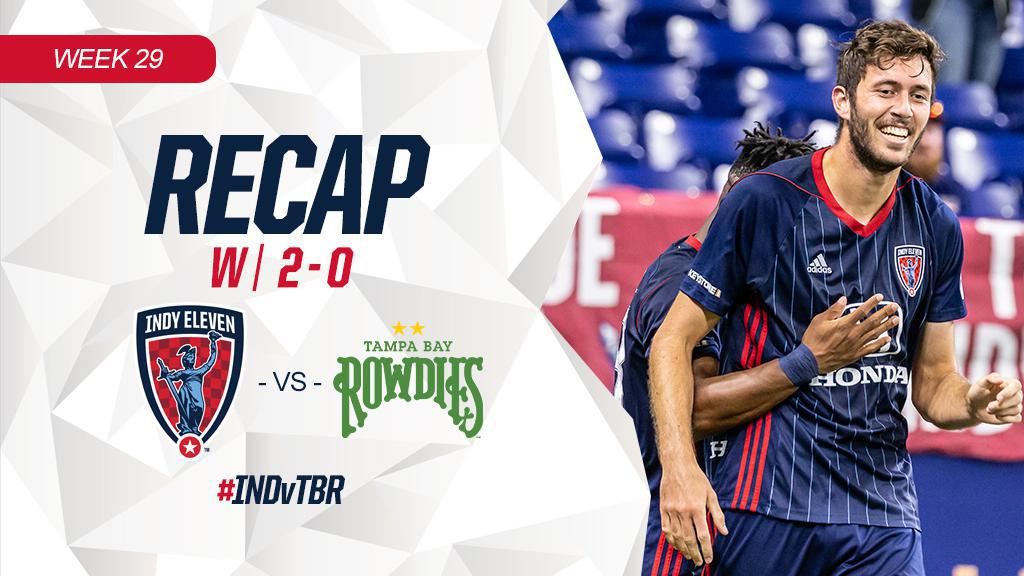 Indy Eleven wheel away victorious after shutting out long-time East coast rivals Tampa Bay Rowdies, 2-0. The three points nudge the “Boys in Blue” back into fifth place after suffering back-to-back losses in the previous two matches.

“I was really pleased,” said Indy Eleven head coach Martin Rennie. “I think in our last two home games, we’ve had two of our best performances. I think other than a couple little let downs in the Pittsburgh game, we’ve been on a run. So, it’s a good time to be playing well.”

Both sides displayed high energy in the opening moments as players made aggressive moves on either side of the pitch. An on-frame header by Eleven forward Jack McInerney in the 21st minute, which was deflected by Rowdies midfielder Afrim Taku, gave “Indiana’s Team” the first look at goal. Tampa Bay responded six minutes later when Eleven goalkeeper Owain Fon Williams brilliantly forced Rowdies forward Sebastian Guenzatti’s one-touch shot from the top of the 18-yard box, ricocheting off the right post.

The stalemate didn’t last as the “Boys in Blue” found the opening goal in the 37th minute. Defender and assist leader Ayoze played an in-swinging ball from the corner to the center of the six-yard box where defensive partner Karl Ouimette headed the shot into the lower left corner of the net. The goal was Ouimette’s third and Ayoze’s seventh assist of the season. Additionally, all three of Ouimette’s goals have been assisted by Ayoze from corner kicks.

Tampa Bay tried to find the equalizer in the last moments of the first half. Rowdies midfielder Junior Flemmings beamed his shot towards goal from outside Indy’s box, but Fon Williams read the play well and knocked the attempt out of play. The Welshman recorded his 11th clean sheet of the year after a four-save performance.

Indy Eleven sealed their victory in the 75th minute when forward Elliot Collier capitalized on a loose deflection inside Tampa Bay’s box. The shot, which was initially played into forward Jack McInerney, created the opportunity for the Chicago Fire loanee’s first goal for Indy.

The win inches the “Boys in Blue” closer to securing a playoff spot. For Rennie, the key to doing so will be retaining his side’s momentum in the final three matches of the season.

“It’s really about continuing the momentum and when you have a good win you have to continue on for the next one,” Rennie said. “So, that’s what we’re looking for. It’s improvement. It’s confidence. It’s believing that they can do it.”

The Circle City side will travel to the Buckeye State this Saturday to take on the newly crowned 2018 Eastern Conference Regular Season Champions, FC Cincinnati. Then, “Indiana’s Team” will return home one more time in the 2018 regular season to host Bethlehem Steel FC on Saturday, October 6. Fans can get tickets to the last home game of the year for as low as $15 at IndyEleven.com/Tickets or by calling (317)685-1100.