"Boys in Blue" to face FC Cincinnati for the third, and final time, in the 2018 USL regular season 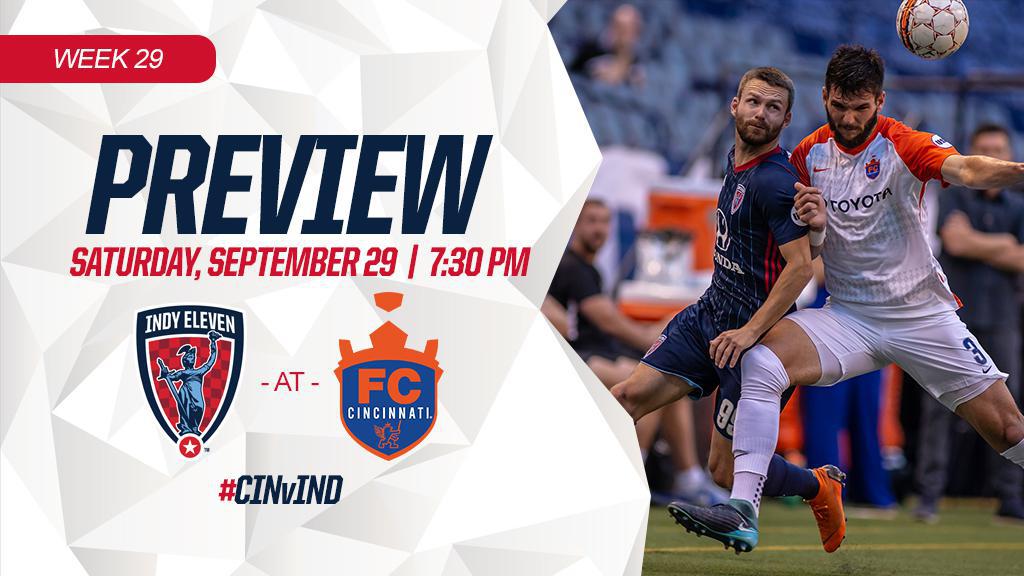 Indy Eleven face FC Cincinnati for the third, and final time, in the 2018 USL regular season. The previous two meetings between the sides resulted in “Boys in Blue” defeats, as they aim to claim one final victory against their neighboring state rivals in the three-game regular season series.

Indy Eleven (13W-9L-9D) rose to fifth in the Eastern Conference table, with 48 points, after defeating Tampa Bay Rowdies, 2-0, Wednesday night. Defender Karl Ouimette scored the game’s opening goal, and his third of the season, off a corner kick played in by Ayoze, who recorded his seventh assist of the season. Forward Elliot Collier scored the game’s second goal and the Chicago Fire loanee’s first as a “Boy in Blue”.  Goalkeeper Owain Fon Williams recorded his 11th clean sheet in the contest and his second in the last five matches. The victory is the first for the “Boys in Blue” after falling in their previous two USL games.

FC Cincinnati (22W-3L-6D) remain at the top of the table after handling Richmond Kickers in a 4-1 victory, making the MLS bound team the 2018 USL regular season champions. Midfielder Emmanuel Ledesma scored a brace that brought him to third in the Eastern Conference scoring chart with 16 goals this season. Cincinnati’s second leading goal scorer, midfielder Nazmi Albadawi, found the back of the net as well, bringing his total to 10 goals in 2018. Goalkeeper Evan Newton conceded his 16th goal of the season, keeping him short of recording his ninth clean sheet. The win improves Cincinnati’s win streak to nine games.

Indy head coach Martin Rennie will need a strong showing from his defense, as his side goes up against the league leading goal scoring team in FC Cincinnati, who have netted a total of 66 times in the 2018 campaign.

FC Cincinnati’s success has relied heavily on its midfielders. The team’s two highest goal scorers are both midfielders, and much of the team’s success comes through the midfield. It will be the responsibility of Indy Eleven midfielder, and captain, Matt Watson to disrupt Cincinnati’s midfield in order for the “Boys in Blue” to claim points.

Watson’s main strength is reading plays before they happen and making crucial interceptions in the midfield springing counter attacking opportunities that lead to goals. Only one other player on Indy Eleven, defender Karl Ouimette, outnumbers Watson’s 45 interceptions, most of which come in the midfield as opposed to Ouimette’s which come in the back third. In order to stop Cincinnati’s potent midfield maestros, Watson will need to play a major factor in the middle third.

Even more impressive is the wicked strikes that come off the midfielder’s left foot. When given time and space, the 26-year-old Argentinian can unleash absolute stunners just as he did in the team’s previous matchup against Richmond Kickers. Indy goalkeeper Owain Fon Williams will need to be on his toes for every second that Ledesma is on the pitch.

The previous two fixtures in 2018 between Indy Eleven and FC Cincinnati were both tightly contested, dramatic affairs. The first meeting resulted in a 1-0 Cincinnati win, and the second a 3-2 Cincinnati victory. With the playoff race in the East as tight as it’s been all season, the “Boys in Blue”, who are five points off third place, need three points against Cincinnati now more than ever.

In order to claim three points, “Indiana’s Team” will need to halt a FC Cincinnati offense that is currently blazing. Cincinnati has scored the most goals in the Eastern Conference and USL, finding the back of the net 66 times. Three players on their squad, midfielders Ledesma and Albadawi and forward Danni Konig are in double digits in goals scored in 2018, with 16, 10 and 10 respectively. Midfielder Corben Bone trails the trio by one with nine goals this season. Even more remarkable for the Cincinnati offense is the fact midfielder’s goal scoring tallies drastically outweigh that of the side’s forwards. Cincinnati has been potent in front of net in their last five matches, scoring 12 goals.

Rennie will need his backline and midfield to be ready. In the first two meetings, Cincinnati racked up 24 shots combined, but were only able to put seven on target and force Indy goalkeeper Owain Fon Williams into three saves. The “Boys in Blue” have kept 11 clean sheets in 2018, and conceded 37 times. Two of which have come in the last five matches for “Indiana’s Team”, along with allowing five goals in the five game stretch. That goal-per-game average nearly matches the total number of goals conceded by Indy on the road, allowing 17 goals in 15 road games.