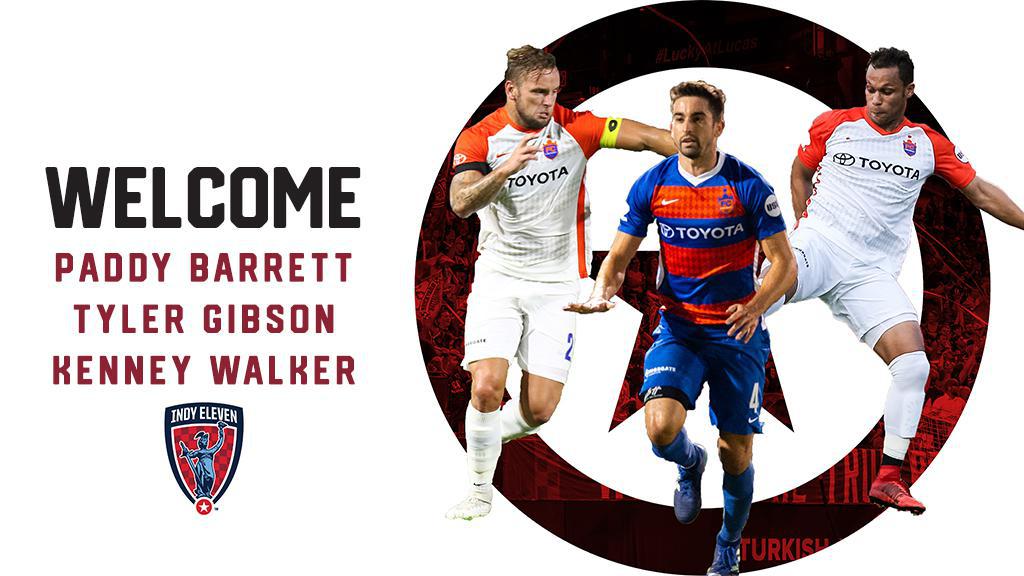 “We’re very happy to add Tyler, Kenney and Paddy to our squad for the 2019 season,” said Indy Eleven head coach Martin Rennie. “They have proven themselves as excellent players and leaders. They will add a lot to our team and community.”

Barrett started all 16 of his appearances in 2018. The Irishman made 83 clearances, 34 interceptions and netted a single goal in his first USL Championship season with FC Cincinnati. The 25-year-old began his professional playing career with Scottish side Dundee United FC before signing with Galway United FC for a single season. More recently, Barrett spent three years with League of Ireland Premier Division powerhouse Dundalk FC, where he competed in a UEFA Europa League playoff match and Champions League Qualifiers during his stay.

Walker, 29, has been a mainstay for FC Cincinnati since the team’s inaugural USL Championship season in 2016. Last season, the Wickliffe, Ohio native appeared in 27 matches and tallied three goals in as much time. Additionally, Walker registered 38 clearances and 41 interceptions. Before signing for the Orange and Blue, Walker was selected 38th overall by LA Galaxy in the 2012 Major League Soccer SuperDraft. He helped the Los Angeles based club capture three MLS Cup championships before leaving at the end of 2015.

Gibson joins Indiana’s Team after a single season in the Queen City. The UNC Charlotte standout made nine total appearances near the end of 2018 after suffering a broken leg during preseason training. After making his first USL Championship appearance against Nashville SC on August 4, the 27-year-old completed over 80-percent of his passes and three-fourths of his tackles. Gibson has been on playoff-bound rosters over the last three seasons, including 2017 NASL champions San Francisco Deltas and a playoff berth with Rayo OKC.