The return of professional soccer to the Circle City was made official on January 16, 2013, when Keystone Group CEO Ersal Ozdemir announced the formation of the organization known initially as Indy Pro Soccer. Just over three months later, the new club would adopt its Indy Eleven identity on April 25, 2013, during a ceremony held at the iconic Soldiers and Sailors Monument in downtown Indianapolis - 152 years to the day of the initial enlistment of the 11th Indiana Regiment during the Civil War.

After 15 months of anticipation, Indy Eleven played its inaugural game at IUPUI’s Michael A. Carroll Stadium on April 12, 2014, a 1-1 draw against the Carolina RailHawks. That match marked the first of 14 sellouts in as many games for “Indiana’s Team” during its 2014 Inaugural Season, the first of four contested in the North American Soccer League.

Indy Eleven began a new era in January 2018, announcing a move to the then-United Soccer League (and now USL Championship) on January 10, followed by a move to Lucas Oil Stadium as its new home on January 29.

After three seasons at Lucas Oil Stadium, in January 2021 Indy Eleven announced a move back to its original home of Carroll Stadium for the 2021 USL Championship season, the team's fourth in American soccer's  formally recognized second division and eighth season of play overall.

From the beginning, Indy Eleven has looked to create a team representative of Indiana that forms strong emotional connections with its fans. Those connections – embodied in the team’s symbolic name, crest, and colors – are made with Indiana’s youth and adult soccer community and the active young adult urban and ethnic populations.

The unique Indy Eleven identity reflects the club’s fans’ desire to have a name tied both to the culture of “the beautiful game” and the State of Indiana, with the name referencing the 11 players giving their all on the field of play in addition to paying homage to the 11th Regiment of Indiana Volunteers, which fought for the Union Army during the Civil War. The inspiration for the name came from Donna Schmink, the Collection Manager at the Indiana War Museum, who, when asked by team officials for ideas on a team name connected to Indiana history, suggested "the Eleventh" in honor of the regiment that valiantly fought under the initial direction of Colonel Lew Wallace.

"Indy Eleven's dedication to its club and community is driven by empowering a culture of excellence through our players and staff."

"To be the preeminent USL franchise that strives to be best in class, on and off the pitch, while inspiring all through the excitement and unity created by soccer." 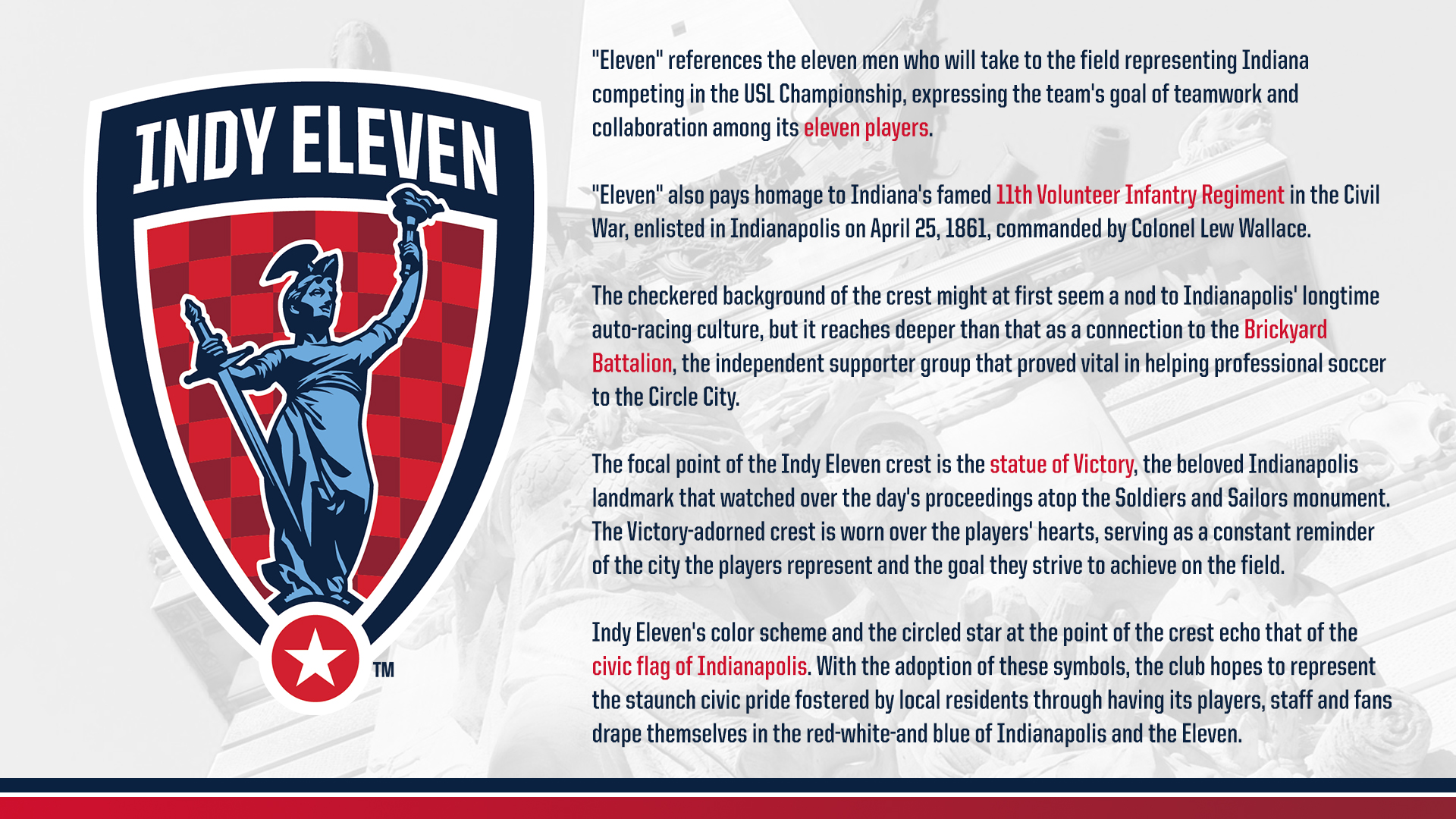 On the field, Indy Eleven captured its first trophy in 2016 by winning the NASL’s Spring Season Championship – and doing so in dramatic fashion. Needing to win its final game on June 11 with at least four goals scored and by at least a three-goal margin, the “Boys in Blue” did just that. Forward Eamon Zayed’s three goals (the first ever hat trick in league play for an Indy Eleven player) gave the Eleven a 4-1 win over Carolina that capped an improbable, undefeated Spring Season under first-year head coach Tim Hankinson, vaulting Indy Eleven to the top of the standings and earning a berth in The Championship Playoffs at season’s end.

A 1-0 win in the semifinals over FC Edmonton at “The Mike” on November 5 put Indy Eleven into the NASL’s Championship Final against the vaunted New York Cosmos. After dueling to a 0-0 draw after 90 minutes of regulation and an addition 30 minutes of added extra time, Indy Eleven would fall to the Cosmos 2-4 in kicks from the penalty spot.

“The incredible effort that every player and staff member has put in over the last three years culminated with a display … worthy of a championship,” said the Indy Eleven owner Ozdemir following the Spring Season triumph. “Everyone associated with Indy Eleven – players, coaches, staff, partners and especially the best fans – helped us achieve this Spring Season title. We're honored to win this for the City of Indianapolis and the wonderful soccer community of Indiana.”

Ahead of the 2017 season, Indy Eleven took another historic step towards building professional soccer in Indiana, formally announcing its bid to bring a Major League Soccer expansion franchise to the Hoosier State on January 31, 2017.

Indy Eleven’s expansion bid is built upon four strengths the club has exhibited since its founding in January 2013 – fan support, a viable stadium project, local ownership and corporate community support.

On April 23, 2019, Indy Eleven saw the process for a new soccer-specific home take an unprecedented step with the passage of Senate Bill 7 in the Indiana State Legislature. The bill’s language would enable a Professional Sports Development Area (PSDA) that would include a multi-purpose soccer stadium as part of the proposed Eleven Park mixed-use development project, moving forward the club’s efforts to give the soccer fans of Indiana a permanent home for the world’s most popular sport – one that utilizes no new taxes or appropriations from city or state governments. 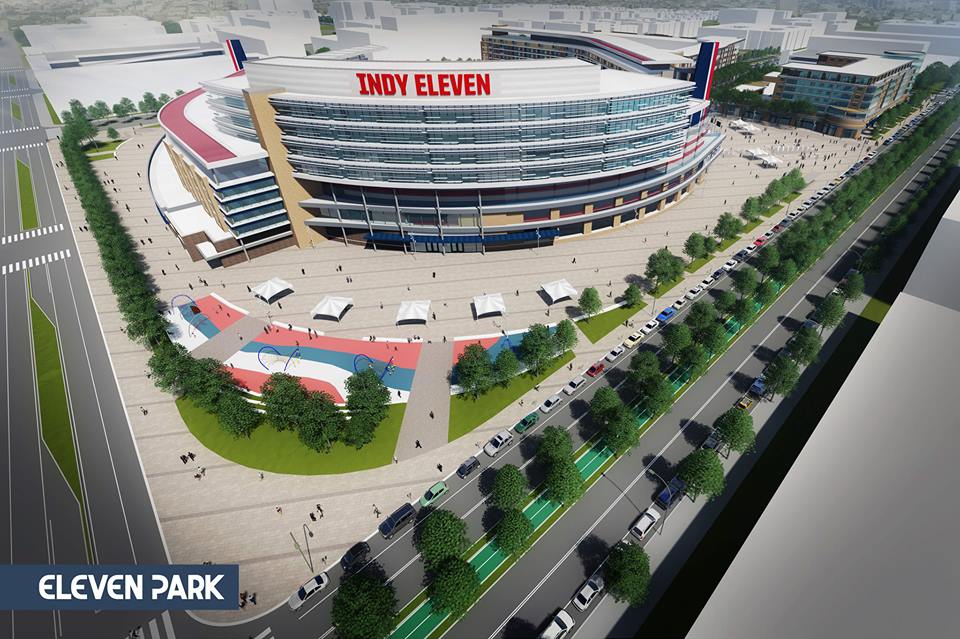